From The Infosphere, the Futurama Wiki
(Redirected from 2035)
Jump to: navigation, search 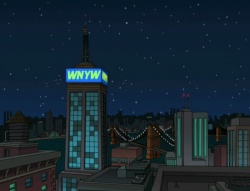 The 21st century was an era of fast technologic development, but it also marked many environmental crisis (the most notable being global warming). One problem was that Earth ran out of natural petroleum oil in 2038. Many cities, such as Old New York, had garbage crisis that were later solved by launching garbage to space. By 2060s, early spaceships had been developed, which were used to mine ice from Halley's comet to prevent global warming. In the end of 21st century, cyborgs enslaved humanity, but by the beginning of the 22nd century humans were again dominant species of the planet.