Into the Wild Green Yonder Part 3

From The Infosphere, the Futurama Wiki
(Redirected from 5ACV15)
Jump to: navigation, search

"Into the Wild Green Yonder Part 3" is the eighty-seventh episode of Futurama, the fifteenth of the fifth production season, the fifteenth of the sixth broadcast season and the third cut from Into the Wild Green Yonder. It aired on 30 August, 2009, on Comedy Central. The Feministas take over Planet Express while Fry learns that the violet dwarf star is an Encyclopod egg.

After a quick recap of the previous episodes, we see that to receive a large payment, Bender has supplied Zapp with information about the identities of the Feministas. Bender has a plan to capture their leader, Leela, by wire-tapping Fry's mobile phone.

At the construction site, Bender obtains Fry's phone, while Fry is debating with Leo and Amy. Amy is confused how Fry can be friends with Leela, yet work with Leo, and Leo cannot stop making quips about Amy's physical appearance. In disgust, Amy leaves to join the Feministas. Later, while closing up the golf course, Fry runs into Frida. Fry asks her to tell Leela that he is really on their side.

At Planet Express, Farnsworth announces that, having lost their delivery crew and with sales of Tickle Me Bender dolls declining, he is forced to close the business forever - again. He removes Hermes's and Dr. Zoidberg's career chips. However, a phone call from Leo Wong puts them back in business again. Leo has hired them to set up a fence to keep out the Feministas while he is destroys the violet dwarf star. However, before they can set up the fence, they are boarded by the Feministas, who take over the ship and paint it pink. Using the fence, the women capture Leo and Inez Wong.

Back at their hideout, Frida is writing up new slogans, while thinking about what Fry told her to say. But one of the Dark Ones is nearby and reads her thoughts. Since Frida does not know who Fry is, the Dark One kills her.

Near Wongminster, Fry runs into Hutch again, who brings him back to the Legion in a different hideout, which is the former city of the Native Martians. Number 9 Man tells him about two ancient species, one snakelike and one froglike, which at one time co-operated to get food, but later began an Arms Race of Evolution. One of them later became the Dark Ones, a species which preys on other lifeforms, and destroyed one entire species after another. The other species became the Encyclopods, defenders of all other lifeforms, who collect DNA from endangered species which they could then use to recreate extinct species.

The Feministas return to their hideout, keeping Farnsworth, Hermes and Zoidberg locked up. To their horror, they find Frida is dead. Leela calls Fry to prove to Amy that he is not helping Leo Wong destroy the violet dwarf.

Fry learns that the Encyclopods have died out after the Chi declined, but have left an egg behind – the violet dwarf star – which the Legion hope to hatch. However, a Dark One is on its way to the egg to ensure its destruction and the Legion does not know what they look like. Despite this, the Dark One's thoughts would be unreadable, allowing the Legion to discover the Dark One via their absence of thought. The members of the Legion cannot look for the Dark One, however, because their tin foil hats do not work at close range to the Dark Ones (which would thus reveal their plan once in close proximity to them); since Fry's brain cannot be read by anyone, he is the only one with a chance.

Interrupting, Fry's phone rings. Leela and Fry decide to meet. However, the wire-tapping of Fry's phone pays off, because Zapp and Bender are listening in on the conversation. Zapp tells Kif to set co-ordinates for Leela (apparently, which is her measurements, 36-24-36).

At the Keeler Crater, the Nimbus infiltrates the meeting, but the Planet Express ship piloted by the Feministas arrives to save them.

The chase between the Nimbus and Feministas begins. Amy plans to lose them through the giant miniature golf course. At the windmill hole, Zapp's carelessness gets the Nimbus sliced in half by the wings of the mill, causing the loss of all his men. Despite the crippled Nimbus, the chase continues to the King Kong hole. The Nimbus is further damaged as a result of a bad shot through the gorilla. Zapp orders the ship repaired and thus cancels the chase.

The hole for the tee, however, is a wormhole, and the Planet Express ship emerges from the other side of the hole near the Nimbus, and they have moved forward enough in time that Nimbus is already repaired and so the chase is back on. While slowing down near the violet dwarf star without fuel, the Nimbus finally catches up with and arrests them. 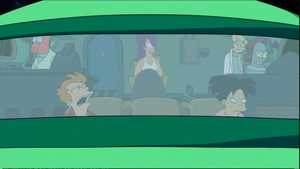