Into the Wild Green Yonder Part 4

From The Infosphere, the Futurama Wiki
(Redirected from 5ACV16)
Jump to: navigation, search

After a quick recap of the previous episodes, the plot resumes at the Earth Supreme Court, where the Feministas stand trial by the court lead by Snoop Dogg's head. The Feministas are charged for several crimes, including protecting the environment. Nixon, Bender, Fry and Leo Wong are witnesses at the trial. The vote by the judges is 5-4 to acquit. However, the female judges' votes only count half, and so it is 4-2.5 to convict.

The Feministas are sentenced to Maxi-Padlock, a high security women's prison. And with the group gone, Leo schedules the demolition for the next day. Fry is unsure what to do, so he seeks out the Legion again. The Number 9 Man explains that Fry has to stop the Dark One from stopping him stopping Leo Wong, and in order to do that, he needs the Omega Device. The device, when activated, will momentarily disable the Dark One, giving Fry a chance to stop it. However, to recognize the Dark One, Fry has to come up with a plan himself, Hutch explains that its thoughts are unreadable, which gives Fry an idea.

At Maxi-Padlock, the group is planning an escape, Leela attempts to get the muck leech to crave its way through the walls. Back at Planet Express, Zoidberg and Scruffy have finished repainting the ship back to its original green colour, while Farnsworth and Hermes have been watching the news about the arrest on the new MagnaPhallix 304". Farnsworth has still not been convinced to do something about getting the crew back.

The muck leech has failed, but Bender breaks the Feministas out instead. Bender explains that this allows him to commit 50 felonies at once by breaking them out, putting his score way above theirs.

At the violet dwarf star, Leo has gathered a large crowd to overlook the demolition. Meanwhile, the escape from the prison is successful with the Planet Express ship arriving just in the nick of time. The rest of the staff has decided to help the group. Farnsworth explains his discontent with living with the thought that he got bribed and misused his position as a scientist.

At the gathering, Fry searches unsuccessfully for a person whose thoughts he cannot read, who must be the Dark One. Fry remembers that his own thoughts cannot be read, and concludes that he must be the Dark One himself. The Planet Express ship arrives to interrupt the countdown. Despite their efforts, Leela gives back the detonator to Fry, and he uses it straight away.

Fry had secretly connected the wire to the Omega Device. The device has no effect on Fry; the muck leech is revealed as the last of the Dark Ones. While he is disabled, the asteroids in the star system form into the shape of a sperm, with the life-filled asteroid as its head; they float into the star, which begins dividing like an embryo, ultimately developing into an Encyclopod.

As the Encyclopod speaks, Leela asks what's going on, and as Hutch begins to tell her, he is attacked by the Dark One. As he dies he sees Frida's necklace stuck in Fry's brain, and removes it. The Encyclopod destroys the Dark One and preserves the DNA of Homo sapiens. Fry is confused, because he thought it only saved the DNA of endangered species. The Encyclopod flies off without explanation.

Zapp resumes his pursuit of Leela and the Feministas. As the crew approaches a worm hole, Leela finally admits to loving Fry. With little time, the crew agrees the only way to go now is in to the worm hole. Into The Wild Green Yonder.

(In alphabetic order)
For a list of people appearing at the audience scene at the end of the episode, see Audience scene 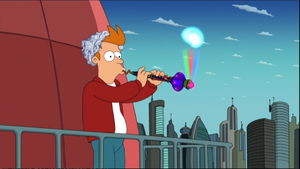