From The Infosphere, the Futurama Wiki
(Redirected from Cameos)
Jump to: navigation, search 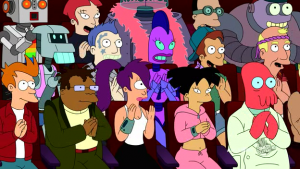 The Gay Robot makes a cameo appearance on the show.

A cameo is a brief appearance of an already known character, which is often non-speaking and in the background, and can either be a known Futurama character, a character from another series, or a real person. It is often included in a fitting scene (for example, the Gay Robot from Shhh...Don't Tell appearing in "Proposition Infinity"), but it can also just be a character walking by in the background (such as Nine, an easter egg having multiples crowd appearances before being given a major role in Into the Wild Green Yonder).