Lucky, otherwise known as Citizen Snips is a crab who is part of the Zookeeper's menagerie.

Following the raid on the Museum of Natural History, he escaped. His fate following this is unknown. 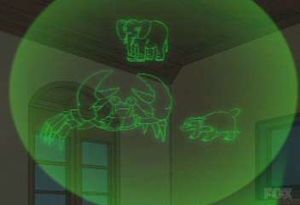 Mayor Poopenmeyer: His crew includes a badger with a troubled past and nothing left to lose, an elephant who never forgets - to kill! And a seldom-used crab named Lucky, a.k.a. Citizen Snips.