From The Infosphere, the Futurama Wiki
Jump to: navigation, search
Tunneling Horror

The "Tunneling Horror" article has been labelled the following levels:

I am not going to start a move war here, so I am not going to move it back initially, but you do realise that it is spelt "tunnelling" in British English? By your logic we should move Walt, Larry and Igner to Walt, Larry, and Igner cause that is the comma rules of American English (as well as Oxford British English). But we have a clear stance on this, unless there is an explicit spelling, such as Mom, we prefer that, otherwise it is just what the first writer of the article picked, an example of this would be the Wikipedia article "neighbourhood". So unless you can fairly say, "that is how it is spelt", please don't use that phrase, cause that is another way to spell the same word. And sorry for mentioning this, but whenever I say "tunnelling" I pronounce two Ls. Don't you? --SvipTalk 21:07, 7 November 2008 (UTC) 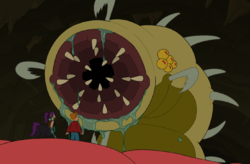 I don't think so. They are both of "leech" like creation, and they appear in entirely different "worlds", making them completely unrelated. It's not even uncanny. The Tunnelling Horror has eyes, the Desert Muck Leech doesn't. --SvipTalk 23:58, 8 March 2009 (UTC)