Difference between revisions of "A Head in the Polls"

"A Head in the Polls" is the sixteenth episode of Futurama, the third of the second production season and the seventh of the second broadcast season. It aired 12 December, 1999 on FOX. It guest stars Claudia Schiffer as herself in a jar. Richard Nixon announces his entry into the 3000 presidential election after obtaining Bender's body. Despite the attempt to get Nixon out of the race, Nixon wins the election.

Act I: "How are you going to live without a body?"

Bender and Fry are on the couch at Planet Express watching "The Scary Door" when Leela runs in and changes the TV to C-SPAN9, which is showing the Presidential Debates of the year 3000. The candidates, Jack Johnson and John Jackson, are clones, with identical views on nearly every subject. Fry says he's not even registered to vote, so Leela makes him go register immediately. Fry meets representatives from all the political parties, and begins to become interested in politics. Back at Planet Express, they see a news report about a mining accident on Titan traps over 1000 robots and sends Titanium prices through the roof. Bender, whose body is 40% titanium, sells his body to a pawn shop.

Act II: "My body loved me and I turned its back on it."

Bender begins living it up with his new wealth. After speaking with the presidents' heads at the Head Museum, Bender realizes he has made a mistake and tries to buy back his body. But when he gets to the pawn shop, his body has already been sold - to Richard Nixon's head. It unfolds that Nixon is using Bender's body to run for President of Earth on a technicality ("nobody can be elected more than twice").

Act III: "You've got real charisma from the neck down."

Nixon’s Head, thanks to his shiny new robot body, sweeps the robot voters in early polls in spite of his miserable performance in the debates. Bender and friends try to get Bender's body back from Nixon. When Nixon refuses to return it, they break into his hotel room at the Watergate Hotel to steal it back. They are successful, but Nixon just buys a new body, a bigger one, with heavy weapons, and slides into office on the robot vote anyway. The regular characters all lament that Nixon won by just one vote, and that they all forgot to cast their own votes (apart from Bender, who wasn't allowed to vote anyway due to his criminal record). The episode ends with Nixon rampaging through the streets of D.C. and making a himself a new entrance to the White House.

Bender's head: Game's over, losers! I have all the money!! Compare your lives to mine and then kill yourselves!

Bender: Bodies are for hookers and fat people.

Nixon's head: Listen here, missy. Computers may be twice as fast as they were in 1973, but your average voter is as drunk and stupid as ever. The only thing that's different is me: I've become bitter, and, let's face it, crazy over the years. And once I'm swept into office, I'll sell our children's organs to zoos for meat, and I'll go into people's houses at night and wreck up the place. Muahahaha!

Morbo: All hail our gargantuan, cyborg president. May death come quickly to his enemies. 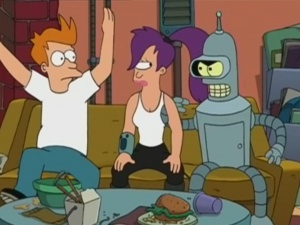