Anthology of Interest I

"Anthology of Interest I", alternatively titled "Tales of Interest", is the twenty-ninth episode of Futurama, the sixteenth of the second production season and the twentieth and last of the second broadcast season. It is the first segmented episode. It aired on 21 May, 2000, on Fox. It guest-stars Al Gore, Stephen Hawking, Nichelle Nichols and Gary Gygax as themselves. Farnsworth's What-If Machine tells three stories. First, what would happen if Bender becomes 500 feet tall, followed by what would happen if Leela was slightly more impulsive, and finally what would have happened if Fry never came to the future. 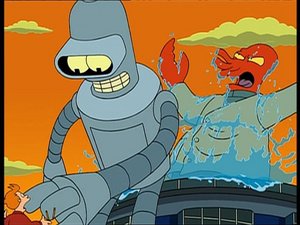 The Professor demonstrates his latest invention, the fing-longer by turning on the What-If Machine. Bender wants to aks it a question. What if he was 500 feet tall?

Hundreds of Bending Units complete work on Bender, who blasts off and heads to Earth. Meanwhile, Fry roams New New York lonely and has no friends. Bender lands near Fry and the two become friends. While catching a throwing disc, Bender kills the heads of Hanson and thousands of their fans so the DOOP retaliate. They begin attacking Bender. They are so focused on stopping Bender that they shoot Fry with electricity when he tries to stop the fighting. This causes Bender to go on a rampage and destroy every building that he can find in New New York. Noticing the carnage, The Professor enlarges Zoidberg so that he can fight Bender on equal ground. However, Zoidberg also has issues and begins destroying New New York. This causes a turf war between the two giants. While Bender attempts to boil Zoidberg, Fry walks up wanting to make Shrinky-Dinks. While Bender is distracted, Zoidberg cuts Bender's feet off and he is impaled on the Empire State Building, slowly killing him. Fry admonishes everyone for their part in the tragedy, while Bender laments that he was unable to fulfill his dream of killing all humans before dying. 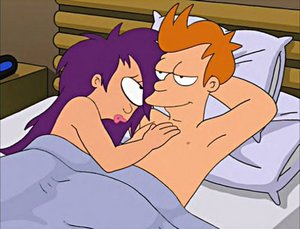 Leela gets to ask a question. After being teased about being unimpulsive, she asks the what-if machine the following: What if she was more impulsive?

Leela buys some boots with "a crazy green stripe". The Professor makes Leela his sole heir because she's "so un-impulsive". She kills the Professor by kicking him into his pit of man eating anteaters to get the money. The Professor's death motivates Zoidberg to begin investigating. Hermes finds the video will which shows Leela killing the Professor, so she attacks him, chops him up, and puts his remains in the garbage disposal. Bender catches her disposing of the body, so he tries to extort her ("The X makes it sound cool!"). She kills Bender using a microwave and its radiation, and she turns Bender into a go-kart. Amy insults her by saying that the go-cart is sexier than her, which causes Leela to kill her and stuff the body inside a grandfather clock.

The remaining staff gather in the Accusing Parlor. Zoidberg attempts to solve the mystery. Cubert, Scruffy and Nibbler independently realize who the murderer is and meet their demise as they are about to expose Leela, all on the same sword. Zoidberg finally works it out, only because he gets a letter from Bender he wrote before he dies, but Fry leaves before Zoidberg can reveal the killer and Leela kills Zoidberg. Later, Fry works it out. ("Hey Leela, whatcha eating?" Leela: "Lobster.") Leela is able to keep him quiet by doing something really impulsive: she has sex with him, which he likes. 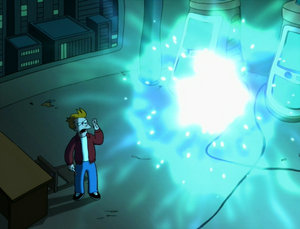 Fry gets to ask a question. Fry's request for a repeat of Bender's question is denied, so he asks: what if he never came to the future?

Fry makes his fateful delivery to I. C. Wiener at Applied Cryogenics. Instead of falling in the freezer, he hits his head. This rips the fabric of space-time, through which we see some of the Planet Express staff. The next day Stephen Hawking drops by Panucci's Pizza. Fry asks him about the hole in nothing, with "monsters" in it. After work, the Vice Presidential Action Rangers abduct Fry. The rangers inform him that they have to fix the time-space continuum or the universe will be destroyed. Fry tells his story and it is decided that when he hit his head he should have died, the attempt at murder fails to fix it and the rift in Space-Time reappears, they try to make him enter the tube but instead he breaks the glass. This causes the universe to collapse on itself and Fry and the Vice Presidential Action Rangers are floating around outside the universe, they start a game of Dungeons & Dragons.

The Professor throws away the What-If Machine because he didn't think the stories were realistic, but declares the fing-longer a success.

However, it is revealed that this entire episode is itself being watched on the What-If Machine by the Professor, who wanted to know what life would be like if he'd invented the fing-longer.

Fry: Will you be my friend?
[Bender holds out his hand.]
Bender: Put it there, pal! [Fry shakes his finger.] I meant your wallet.

Zoidberg: So, now Zoidberg is big, huh? That's more like it! Who's intimidating who now, big city? [He walks towards a building.] Hello, Mr. Chase Manhattan Bank. Deny my credit card application, will you? [He growls and knocks the building in half. He turns around.] Ah, the famed Apollo Theater. "Boo" me off stage on open-mic night, huh? I'll show you!

Leela: OK, just try to be nonchalant.
[Cut to: Planet Express: Lounge. Leela walks in whistling nonchalantly.]
Zoidberg: Alright, so you're nonchalant. Quit rubbing our noses in it.

Zoidberg: My next clue came at 4:15 when the clock stopped. And another came 2 hours later, at 4:15, when I discovered the murdered body of Amy's dead, deceased corpse.

The Un-Freeze of a Lifetime

Characters seen in the "Attack! Bender vs Zoidberg" poster from 2006