"Assie Come Home" is the one hundred and thirty-fifth episode of Futurama, the twenty-first of the seventh production season and the eighth of the tenth broadcast season. It aired on 31 July, 2013, on Comedy Central. Bender searches the universe for his missing shiny metal rear end.

Act I: "The ship's still here, and nothing was stolen."

Farnsworth sends the crew to deliver a mysterious crate to Peoples α, "the planet of gangs, thugs, and hustlers". At Peoples α, Fry and Leela complete the delivery while Bender guards the ship. Fry and Leela deliver the crate, barely surviving a gang battle between the blips and the cruds. They return to the ship only to find that thieves have bot-jacked Bender, having made off with all of his body except his eyes and mouth.

Bender's RoJack leads the police to the chop-shop of Yuri, who provides them a list of the buyers of Bender's parts. The Planet Express crew search the galaxy and find all of the parts except for Bender's ass, which turns out to have been on the freighter Floatwell when it sank in the Sargaseous Sea. This "sea" is actually a nebula, but traveling there is like sailing an ocean: asteroids rise from dense fog like icebergs, and ships can sink.

Act III: "Maybe I have been selfish, hiding my ass under a bushel."

Navigating the Sargaseous Sea with difficulty, Leela crashes the ship into an inadequate lighthouse, whose keeper, Tarquin, helps the crew to recover Bender's ass. While they relax back at the lighthouse, the cruise ship S.S. Miami Muy Caliente approaches the lighthouse on a collision course, the ship's captain unable to see its feeble light. Celebrating Bender's reunion with his ass, Fry takes flash photos of Bender posing with it. The light reflecting from Bender's ass is brighter than the lighthouse, enough to alert the crew of the Caliente just in time to avoid disaster. Seeing its potential as a highly effective lighthouse mirror, Tarquin, Fry, and Leela convince Bender to leave his ass behind.

Although Bender accepts his loss, his ass finds it unbearable to listen to Tarquin reading bible verses. It escapes from the lighthouse and returns to Bender. Upon the reunion, fireworks appear in the sky, but they turn out to be ships exploding in the Sargaseous Sea, where the lighthouse beacon shines no more.

On 5 February, 2013, Vulture.com released a preview clip for the tenth broadcast season,[1] which contained footage from the episode.

By 26 July, Comedy Central had released a two-minute preview clip featuring a fight between the crud gang and the blip gang. [2] 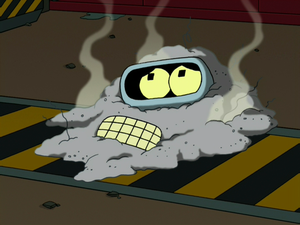 Bender with only his mouth and eyes in "Obsoletely Fabulous".

Fry: Uhm, Leela, remember when we were trying to guess what would happen if someone stuck a gun in my face and you said I'd probably crap my pants? Well...

Moustached crud: We are the cruds, but we're over here. And don't shoot. That crate is a gift from us.
Leela: What?!
Fry: Huh?!
Blip #2: For real?!
Moustached crud: There's been enough violence on these streets, too many lives and mirrors have been shattered, so yo, we sent you a crate o' weapons as a sign o' trust. Together, we can use them to rid our streets of the real enemy: giant spiders!
Fry: I knew it!

Bender: They stole everything except my mouth and eyes! I guess they didn't like all my screamin' and winkin'.

Ship captain: I thought we were near the rocks, but I don't see the lighthouse, so...everything is fine and we can relax. [He speaks through the intercom.] All hands on deck...for mojitos.

[Bender is sat looking miserable at the table in the Planet Express employee lounge, whilst Fry, Leela, Amy, Hermes and Zoidberg are sat watching the TV.]
Amy: Bender, come join us, we're watching Rear Window!
Bender: I used to stick my rear out the window...
Zoidberg: If you prefer, we could watch Behind the Music.
Bender: My behind used to make music...
Hermes: Backdraft is on.
Bender: Even my ass wouldn't watch that.