Difference between revisions of "Bender Gets Made"

"Bender Gets Made" is the twenty-sixth episode of Futurama, the thirteenth of the second production season and the seventeenth of the second broadcast season. It aired 30 April, 2000 on FOX. Bender becomes a member of the Robot Mafia after serving them at Elzar's.

Bender agrees to work for Elzar if the crew are released. While working at the restaurant, the robot mafia visits and Bender does everything he can to satisfy them, Donbot likes his attitude so he hires Bender as a goon. Bender is given a lottery disk to deliver and notices the cops and gives it to Tinny Tim to deliver as the cops inspect him. Bender then helps in a large crime under the name Blotto and pretends to be sick while the Planet Express crew are on their mission. The mafia are stealing zuban cigars from the Planet Express Ship.

Act III: "You're a freakin' genius, you idiot!" 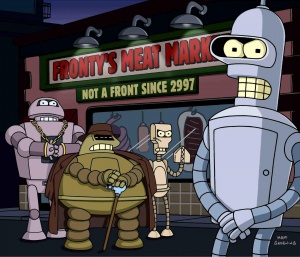