Difference between revisions of "Benderama"

"Benderama" is the one-hundred-and-fifth episode of Futurama, the seventeenth of the sixth production season and the second of the eighth broadcast season. The episode aired 23 June, 2011 on Comedy Central, with "Neutopia", which actually follows it in production order, immediately preceding its airing. which actually follows this episode in production order. After the Professor invents a duplicating machine, Bender begins copying himself, his copies threatening to consume all the matter on Earth.

Act I: Do you see a robot in this room named "Folder?" 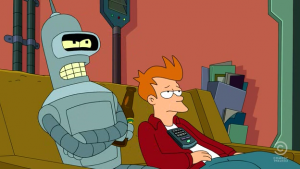 Bender and Fry are interrupted by the Professor.

The Professor opens the episode by unveiling his latest invention, the Banach-Tarski Dupla-Shrinker (which resembles an overhead projector), a duplication machine that is able to scan an object and then produce two exact yet smaller copies. The Professor explains that as he ages, his frame grows shorter, and he becomes more susceptible to the cold; therefore, he needs twice as many sweaters, in a smaller size. He demonstrates by scanning a full-size sweater, explains that the duplicator uses matter for fuel (and "any old useless matter will do"--in this case, Zoidberg's wedding photos), and produces two identical, smaller sweaters. The Professor asks Bender to fold his new sweaters, and Bender grudgingly complies, although the lazy robot complains about having to perform two separate tasks. Bender spots the unattended duplicator and, devising a way to more efficiently complete his chore, places the machine inside his torso, eats several pieces of lab equipment to power it, and produces two miniature Benders, whom he then asks to fold one sweater each (although they don't actually do this).

Bender and his duplicates get along well, hanging out together, causing mischief, and even going on a Planet Express job to deliver hygiene products to an unattractive, self-conscious alien giant. The three Benders make a litany of crude jokes at the giant's expense, insulting his appearance, although the mild-mannered alien does not respond to their taunts... until Fry, attempting to be compassionate, remarks that the giant's looks are probably hereditary, inadvertently insulting his mother. This sends the giant into a rage, and he attacks the fleeing Planet Express ship, although the crew manage to escape.

Back on Earth, Bender and his duplicates fondly reminisce about mocking the giant. When Bender asks his duplicates for a pair of cigars, they move to oblige him, but when he changes his mind and asks for four, they bristle at the idea of having to carry two cigars each. Instead, they activate their own duplicators (since Bender had the original duplicator inside him when he used it to scan himself, all of his duplicates have one as well), creating another four, slightly smaller Bender clones. This process repeats itself, rapidly escalating until Planet Express headquarters is infested with an army of increasingly smaller Benders.

Act II: This place is crawling with yous! 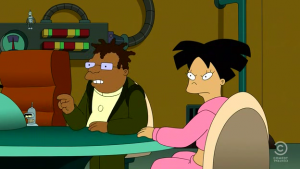 Bender is unconcerned with the steadily increasing number of his clones, as this simply means "there are more Benders around", which he considers to be a good thing. However, the Professor displays a mathematical equation projecting the Benders' population growth, explaining that they will continue to replicate ad infinitum, multiplying exponentially; because they need matter in order to replicate, they will eventually consume the entire planet. The Professor calculates that the Benders are currently in their eleventh generation, making 2,046 Bender duplicates that must be destroyed. The crew scour the Planet Express building, exterminating the tiny Benders like vermin, and are able to account for them all, but Amy realizes that one of the dead Benders is actually a doll, a piece of merchandise left over from Bender's television career. Bender is not worried that a single duplicate managed to escape, believing it could do little harm, only for his couch to be eaten out from under him by a swarm of microscopic Benders, which appear as a "grey goo". The Professor laments that the Benders will eat all the matter on Earth, but when they also consume Bender's beer, Leela points out that all Benders, like the original, are powered by alcohol; they will exhaust the world's supply of booze long before they are able to destroy it.

Sure enough, the Benders soon drink all the alcohol in the world, and with none left to replace it, they begin to die off. As the professor is bathing, however, he notices that his bath water has somehow been transformed into alcohol; the Benders, which have miniaturized to the atomic level, have begun rearranging water and carbon dioxide molecules into alcohol molecules in order to provide themselves with more fuel. Within hours, there will be no fresh water left on Earth. Bender and his duplicates prepare to take down the monster.

As a result of all the drinking water on the planet being converted into alcohol, everyone in the world becomes severely intoxicated. Shortly afterward, the alien giant arrives on Earth to apologize for his earlier attack on the Planet Express ship, but the drunken crew berate him with savage insults (a situation that does not improve when Zapp Brannigan begins firing on him from a tank). When the giant, struggling to control his temper, is unable to reach his therapist, he goes on a rampage, and begins to destroy New New York. Fry pleads with Bender--who, as a robot, is the only member of the crew to remain sober--to stop the giant. The slothful Bender is reluctant, but when Fry offers to fold the Professor's shirts in exchange for Bender saving the world (which Bender computes as Fry performing two tasks against his one), Bender agrees, believing that he got the better end of the deal.

Bender walks into the street and calls upon the assistance of his many microscopic duplicates, overcoming their inherent laziness by explaining that if they all cooperate to complete their single job, they will each only have to contribute one-quintillionth of the required effort. The numerous copies swarm around Bender, taking the form of a single, gigantic "Big Bender" who engages the giant in a fistfight. Bender initially has the upper hand, but after he insults the giant's mother, the giant begins to pummel him. The giant appears to have won, only for the Benders to swarm across him, devouring him until only dust remains. Exhilarated by his victory, Bender asks his copies to use their powers to help him defeat other "monsters", such as poverty, disease, and "unliteracy"; the Benders, however, are repulsed by the idea of having to do more work, and leave the planet in search of a place where they "won't have to do one-quintillionth of a thing all the time", leaving a battered, partially eaten Earth behind.

The next morning, the Planet Express crew are all recovering from a collective hangover, although the Professor is in high spirits, as someone finally folded his sweaters. The crew were all too drunk to do this, prompting Fry to ask Bender if he finally learned a lesson about being lazy. Bender replies that maybe he did, but adds with a chuckle that perhaps he rescued one of the mini-Benders solely for the purpose of folding the sweaters for him. Bender exhales the smoke from his cigar toward the camera, revealing that it is not smoke at all, but a cloud of countless mini-Benders, all laughing maniacally. 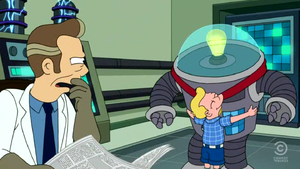 The The Scary Door episode resembles the "The Brain Center at Whipple's" episode of The Twilight Zone. 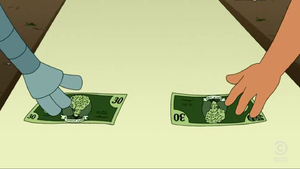 Braino appearing on the Earthican $30 bill. 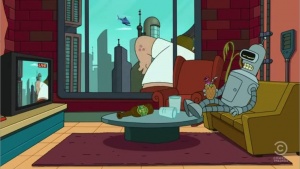 The helicopter is missing on the TV.

Professor Farnsworth: Enough good ones, everyone. We have a delivery to an alien space giant.
Hermes: You'll have to be respectful. This customer is fifty-feet tall and sensitive about his appearance.
[Amy jumps from inside the ship and looks at items on the cart.]
Amy: Colossal tooth whitener, mega deodorant, humongous acne cream... Aw, and one regular-sized condom.
Bender: All that and a small wiener? This guy's got it goin' on.

Professor Farnsworth: Scruffy, what is that tiny Bender doing in my soup?!
Scruffy: It appears to be giving you the finger, sir. Enjoy.