Bendin' in the Wind 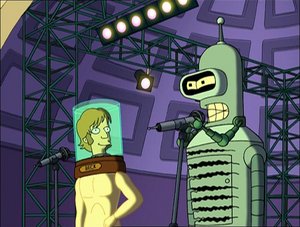 "He could be a storage closet... for outdated pants"

While walking, Fry and Bender come across the NNY Hole Project and Fry gets a free Volkswagen Transporter microbus (VW) and pushes it back to the Planet Express. Though gas (petroleum) doesn't exist anymore, a can of whale oil is supplied and Bender starts to open it via the can opener, but he is caught by the magnetic forces and is horribly damaged.

Act II: "We can't just dump him in the gutter like Grandma's ashes!"

Bender is now unable to move and while at the hospital, he notices Beck's Head, his favourite folksinger, and Beck invites Bender to be his new washboard player, and gives him robotic mini-arms, and plays by scraping them across his broken chest.

Bender and Beck go on tour, while Fry, Leela, Amy and Zoidberg cram into the VW and follow them. While at a laundromat, their money is ruined, leaving Fry and the rest without any money, food, or clean clothes. Beck and Bender organise a benefit for broken robots and Bender starts writing his own song. After he finishes writing his song, he is visited by Fry and the rest and they are shocked by the way he is moving again.

Bender is wondering how he can play at his upcoming concert, Bend-Aid and thinks of something... by faking it. Bender is now at his concert singing with Beck, and the others make money by selling "love beads", a pearl made by Zoidberg in his throat. Bender then gets a giant check before singing the song he wrote, "My Broken Friend", and right before he finishes his song, his secret is exposed by jumping and moving. He then escapes, lands in the VW, and is off.

Act V: "Put the metal to the pedal to the other metal!"

Bender and the rest start driving through town, trying to outrun Beck and his minions, and the VW falls off the Golden Gate Bridge, because it is a hover bridge. Beck recovers the huge cheque and Bender is off with the crew paddling home with a magnet on his head singing "Bender is Great".