Difference between revisions of "Infosphere:Featured articles/2009"

This page lists articles that were featured on the Main Page during 2009. If you have ideas for pages that should be featured, please add them on the nominations page.

The lost city of Atlanta is home to many things, such as Turner Field, the Coca-Cola bottling plant, a fabulous airport and mermaids, such as Fry's former girlfriend Umbriel, who is the daughter of the local mayor. Unfortunately the relationship fell apart because it turned out that while he loved her, he wasn't in love with her.

In Futurama's first adventure into plausible alternate realities, Anthology of Interest I, the What-If Machine reveals how different life could have been. A 500 foot tall Bender fights an even equally big Zoidberg in the streets of New New York. Leela goes on an impulsive killing spree. Finally, Mr. I'm-My-Own-Grandpa doesn't fall in the freezer tube, creating a universe ending paradox.

Throughout their adventures the Planet Express Ship has carried the crew from place to place. The ship is one of the Professor's many creations and is capable of 99% light speed thanks to its Dark Matter Engines. The ship has all the features you would expect in a mighty spaceship, such as a bridge, a brain room, a turret, a bathroom and a sauna and has seen many battles. 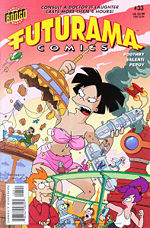 Piracy, science and romance are the orders of the day in Attack of the 50-ft Amy. In the 33rd Futurama comic; Cubert and Dwight's attempt to use the Professor's inventions to win a science fair results in Amy growing to gigantic proportions, while Bender takes on the personalities of various movie characters after swallowing his movie collection. 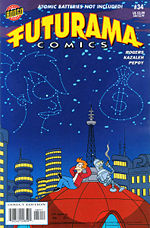 In this issue of Futurama comics, as it leads to obedience, the Professor made the decision to try to get his staff into relationships. It is soon revealed that a star Fry had bought for Michelle was actually a planet and so made the decision to clone her so that he could live on Planet Michelle with her. In the meantime, Bender becomes a date doctor, but it doesn't take long for his clients to turn on him.

Among Futurama's villains, none are more openly violent around the holidays than the incorrectly programmed Robot Santa. First constructed in 2801 by Mom's Friendly Robot Company. Santa makes his home in a Death Fortress at the North Pole of Neptune, where undersized Neptunians make toys and weapons for his yearly slaying.

Amphibiosans are the native sentient life on Amphibios 9. They are humanoid creatures that are smaller and lankier than the average human, have no bones and are instead supported by a system of liquid-filled bladders. Amphibiosans have three distinctive phases in their life cycle that they go through, the tadpole, the "bulboid" and the swarm of hookworms. Either gender is able to bear young, which after birth is left to grow in the swamp at their clan's birthing grounds for twenty years.

"Roswell that Ends Well" is an episode from late in the third production block and was used to start the fourth broadcast season. After a freak accident involving a supernova and popcorn, most of the staff of Planet Express find themselves sucked through time to 1947 and on returning to Earth crash in Roswell, New Mexico. The people of the time period mistake Bender's body for a UFO and capture Zoidberg. Amid the confusion, Fry manages to get his "grandfather" killed and then perform another unspeakable act. 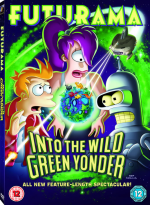 Into the Wild Green Yonder is the final Futurama film from the fifth production block and aired, slightly adjusted, as the last four episodes of broadcast season six. The epic struggle between golfing and environmentalism once again rears its ugly head and is made more intense thanks to an even more ancient conflict. Leela, Amy and other prominent women join Frida Waterfall's group as they try to stop construction of Leo Wong's giant miniature golf course. Meanwhile, Fry finds himself in an awkward position as a double agent; posing as Leo's most loyal employee while secretly working for Nine as a mind-reading member of the Legion of Mad Fellows, who are the only group truly aware of what is at stake.

Futurama often makes reference to popular culture, however science fiction franchises, such as Star Wars and Star Trek are among the more common. Such references range from the lightsaber-like clubs used by officers such as Smitty, URL and Colleen to the Chanukah Zombie's TIE Fighter and way the reveal of Greyfarn's relation to Ignus played out. While there are no references in the Star Wars films, the expanded universe has been reciprocating with references back to Futurama.

"The Sting" is the twelfth episode of the fourth production season of Futurama. In the episode, the crew are told that they are not good enough to go on their next mission; collecting honey from a Space Bee hive. Leela feels the need to prove herself, and so she drags Fry and Bender along. Everything goes smoothly until Bender accidentally insults their queen and the angry swarm kills Fry. After the funeral, Leela's grief begins to send her insane and she becomes convinced that Fry is actually still alive.

Charles Constantine is a 21st century law graduate, better known as the man Michelle left Fry for. The pair met late in 1999 while she was still dating the pizza boy. They eventually married, and she supported him through law school. They broke up after his graduation when she learned of his infidelity. It is safe to assume that Charles didn't freeze himself, which would mean he died well before Fry defrosted.

The Galactic Entity is a god-like being, suspected to be the remains of a space probe that collided with God. Its existence is proof that the religious beliefs of the the monks of Dschubba are accurate. The binary-speaking entity was once encountered by Bender when he was sent drifting through space after being fired from the ship's torpedo tube and was responsible for sending him back to Earth. It is also capable of generating Time Spheres that allow for "paradox free" one-way time travel into the past.

There comes a time in some people's lives when they feel they've hit rock bottom, for Bender this came about way back in the year 3000. In "Hell is Other Robots", Bender met up with an old friend at a Beastie Boys concert, who got him hooked on electricity. The path of self destruction came to an end when he found religion. Robotology made him a better manbot, his friends found this unsettling and so they set about putting him back to his old ways, sending him to Robot Hell in the process.

From the late 20th Century onwards, the only commercially available form of time travel, has been cryogenic freezing and one company that has been active in the field since then is Applied Cryogenics. The lab, first seen in Space Pilot 3000, was very much key to setting up the series as well as a being important to the plot of a few other episodes. Applied Cryogenics is where Fry first met Leela, was reunited with Michelle and more recently, was used to bring a time travelling Fry back to the future and hosted the explosion of a pair of time paradox duplicates and Nudar.

When Matt Groening and David X. Cohen were pre planning elements for Futurama, many ideas were devised. While some didn't pan out, many such as Nibbler's shadow have formed ongoing story arcs. In the pilot episode when Fry fell into the cryogenic tube at Applied Cryogenics an unexplained shadow appeared under the fallen chair. While Nibbler himself was introduced three episodes later, there was no explanation until episode 64, "The Why of Fry". As it turns out, Fry's accidental freezing wasn't quite as accidental as he thought...

Just as Futurama regularly makes reference to other works of fiction, there are also some that refer to Futurama in popular culture. From Action Comics to Mozilla Firefox, the creators of various media often make reference to things they enjoy, thus Zoidberg has popped up alongside characters like Superman and Daffy Duck and Bender has appeared in Family Guy and Star Wars. There are of course some less convincing references, that may be mere coincidence.

Despite Matt Groening's admission during one of the Commentaries that he'd never seen a whole episode, many writers and other production staff are big fans of Star Trek. As a result, Futurama has been packed full of references to the Trek franchise. While some references are less obvious, such as games of 3D Scrabble, 3D Pac-Man and 3D Chess, there are some more obvious references such as cameos from former Star Trek cast members or the entire episode "Where No Fan Has Gone Before".

Amy Wong is Planet Express' long term intern, hired from one of Farnsworth's engineering classes sometime in the late 30th Century. Amy's family are billionaires that own the western hemisphere of Mars, and as a result she has always had access to all the best things money can buy. Although best known in the early seasons for her clumsiness and way with men, she is also a miniature golf champion and in the third season began a long term relationship with her fonfon ru Kif Kroker.

As the resident bureaucrat, Hermes Conrad is the man responsible for keeping all of Planet Express' paperwork in order. Hailing from Jamaica, Hermes' main interests are filing and limbo as well as other interests common in his homeland. Before signing on to work at Planet Express, he was an Olympic grade limboer who retired due to a freak accident that seriously injured a fan. Hermes' wife LaBarbara's ex-husband has been a long time rival both professionally and romantically, although Conrad has taken the lead in the latter category.