Iron Cook is a Japanese television show where two cooks compete, one of them the challenger, to see who is the best. They are both given a main ingredient they must use in all of the meals they cook, then they choose all they want, and they must cook at least three meals for the three judges before time runs out. The show has a panel of judges who decide which meals taste good and which don't. It is hosted by a Japanese man Koji. The most recent challenge was made by Bender to Elzar as a revenge for the death of Helmut Spargle. The main ingredient was Soylent Green and the winner was Bender, only because he used the secret ingredient of Helmut Spargle (water with LSD), so the judges loved Bender's food. The studio has two kitchens where the chefs cook their meals, and behind the cameras an audience watches the show live. 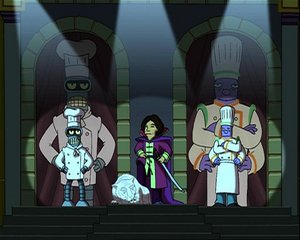 The studio with Koji between Bender and Elzar