Difference between revisions of "Neptune"

Neptune is a planet in the Sol system, in addition to Earth, Neptune supports life, alongside other Solar System planets such as Venus (Venusians), Mars ((formerly) the Native Martians), as well as jungles and a university, Earth, Mercury (A gas station attendant) and Pluto (Penguins). It is unknown how Neptune can support life, as it is a gas giant, and anything living on it would fall straight through until crushed by pressure.

Neptune's main inhabitants are Neptunians, many of which have moved to Earth, where they have formed minority areas in cities like New New York, such as Little Neptune. Neptune is largely an ally with Earth and a member of the Democratic Order of Planets. 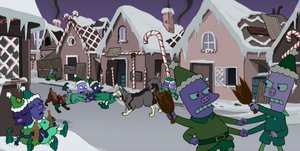 On Futurama, the planet has only been visited twice, and only near the North Pole of Neptune, where Robot Santa has his Death Fortress. The North Pole hosts a single village, Jolly Junction, which is in inhabited by the servants of Robot Santa, whom are basically shrimpy Neptunians, because he doesn't feed them. Their main function is to build the toys, but since Robot Santa judges everyone as naughty, his servants basically do nothing. During the two visits by the Planet Express crew, the toy factory has been reopened, if only for a brief period.

Neptune also hosts other exotic animals, such as the Neptunian Slug, a key ingredient in Neptunian food, which can even be obtained on Earth, according to Elzar.