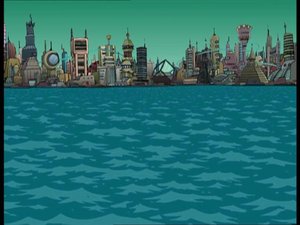 The city of New New York

In the year 3000, the name of the state of New York has been changed to New New York, presumably when it was rebuilt after one of Earth's periods of alien invasion. The city of New New York is built onto the ruins of Old New York. The city has seen some changes; the subways have been replaced with a tube transport network, and Ethnic neighborhoods like China Town and Little Italy have been joined by Little Neptune. But in many ways it has not changed much in 1000 years; people are still rude, public transportation is over-crowded, and it is place where many cultures meet.