In the 20th and early 21st century (The Stupid Ages), Old New York was known as simply New York. It was one of the biggest cities in the world and produced more garbage than any other city. In 2002 the city put its Garbage on a giant barge. 50 years later the garbage ball was launched into space.

Locations of interest during the 20th/21st century

Description: A pizzeria where Fry was the delivery boy.

Description: A cryogenics lab where, in the 20th century, Fry is frozen. In the 30th century, Leela is the Fate Assignment Officer.

Description: An attraction on Coney Island.

First Appearance: "The Luck of the Fryrish" (3ACV04)

Name Reference: N/A
Description: The family home belonging to Yancy and Mrs. Fry. The house appears to be unchanged in over a thousand years, remaining in it's original decrepit form. An unused bomb shelter, housing the best music of the 1980's in one amazing collection, can be found in the basement. 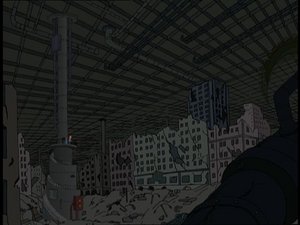 The ruins of Old New York.

Fry in the ruins of Old New York.

The remains of much of New York still exist as ruins, due to the attack by Bender, below the streets of New New York.