The Omicronians are a violent, aggressive race. They are residents of Omicron Persei 8 and possibly other planets and/or moons in that system.

The Omicronians are fans of 20th century television, particularly the programming of the FOX Network. They watch these programs "live" in the year 3000, since radio waves from Earth take one thousand years to reach Omicron Persei 8. [1ACV12] Their technology is more advanced than that of the human race, as evidenced by their battle ships, and they know the secret of immortality. [1ACV12] The Omicronian war machine is one of the chief threats to the DOOP, and the Omicronians have been known to react disproportionately to even the slightest disturbance or irritation. They first invaded Earth when Fry accidentally knocked FOX off air resulting in the Omicronians being unable to watch the finale of Single Female Lawyer. Since then, there have been further invasions of Earth: the second invasion occurred when Humans began - originally unwittingly - eating the Omicronian young; though the third invasion was actually a fake. and the fourth invasion, which occurred in 3013 was "led" by a reluctant Jrrr, which was the shortest invasion so far. The Omicronians also have scouting. 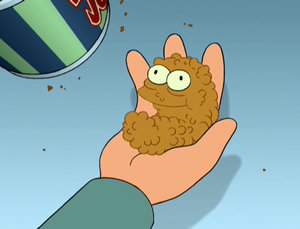 A larval Omicronian, a "poppler", in their conscious stage. [2ACV15]

Omicronians stand around eight feet tall, and have reptilian characteristics. Their skin can have various colours, ranging from a greenish-yellow to dark brown. Their eyes are yellow with oval pupils. They eat in great quantities, and are not particularly picky eaters, having been known to swallow humans and orangutans whole. Aside from their larger size and strength, their only super-human ability seems to be their capacity to swallow very large objects (such as people) in a similar manner to the Nibblonians. However, the Omicronians' swallowing capacity is arguably inferior as the Nibblonians are much smaller.

The males' horns, coloured white or brownish, would appear to act as their reproductive organs, and large horns signify a powerful male. [6ACV11] Lrrr being the only Omicronian seen with dark horns might suggest that dark horns represent royalty, but it is not known if this is biological or cultural (Lrrr's horns could have been darkened artificially).

Omicronians can apparently experience the effects of drugs in the same way as humans, as evidenced when Lrrr eats a hippie and begins to exhibit signs of marijuana use. [2ACV15]

Omicronian feces, or at least those of children, are similar to Earth's candy. [7ACV16]

Omicronians begin their lives in an immature, larval state, which are placed in large pits by the billions on nursery planets. In this state, they resemble fried shrimp and are reportedly delicious: they became extremely popular when sold under the brand name Popplers, distributed by the fast food franchise Fishy Joe's. [2ACV15] As they mature they exhibit a rapid development of sentience: it would appear that young Omicronians instinctively know how to speak once they have reached a certain stage. It seems unlikely that the parents are actively involved in their upbringing, but this is only speculation; there is however evidence to suggest the younger generation consumes the previous one: a young Omicronian informs Leela, "When my species grows up, we eat our moms".

The act of reproduction for this species may be hazardous to any life-forms within a "safe, 500 meter radius", [4ACV17] and the female's organs must first move into position before commencing intercourse. [6ACV11]

This article or section is a stub. You can help by expanding it.

Lrrr: People of Earth, I am Lrrr of the planet Omicron Persei 8. [He hears feedback behind him.] Turn down that TV, Ndnd.