An advanced robot named Benderine arrives, dying, at Planet Express. Professor F has his mutants bring him inside. The Professor re-fuels Benderine and asks him to stay on for some testing. It is determined that Benderine was created by their arch-enemy, but they ask him to train with the team, against Uniclops' wishes.

Benderine makes the team. The Mayor holds a ceremony honouring the Planet X-Press Men, but Momneto attacks. Fry wakes up from his dream and the crew fight off the Electric Boogaloo Gang using methods similar to their counterparts in Fry's dream. 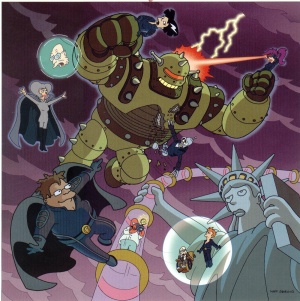