Difference between revisions of "Rebirth"

"Rebirth"[3][4] is the eighty-ninth episode of Futurama, the first of the sixth production season, the seventh broadcast season and the second run of Futurama. It aired 24 June, 2010, on Comedy Central.[1][2] 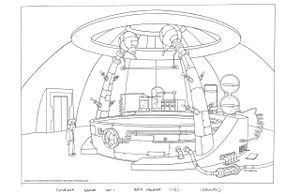 Concept art of the birthing machine used to rebirth the crew members.

The first episode of the sixth season picked up from the events of Into the Wild Green Yonder.[5] It featured a "literal" rebirth of the characters,[5] and focused on the Fry-Leela relationship, rather than more complicated consequences of the "rebirth".[6]

After the first table reading on 7 August, 2009, Maurice LaMarche commented that the script was "hilarious, & strangely touching", and noted that "[y]ou guys are gonna LOVE this episode in nine or ten months! What a fantastic way to get back into Futurama, The Series!"[7]

The Hypnotoad appears on screen, and Bender's voice announces that people will forget the series was ever cancelled "by idiots" and later revived "by bigger idiots." The scene changes to Fry walking into Professor Farnsworth's laboratory, asking why his hair is frizzy and why he is covered in burns. The Professor explains that when the crew entered a wormhole at the end of Into the Wild Green Yonder, they emerged near Earth through the "Panama Wormhole", Earth's main channel for shipping. Zapp Brannigan, aboard the Nimbus flagship, damages the Planet Express Ship, causing it to crash in a large explosion with the Nimbus outside of the Planet Express headquarters. Professor Farnsworth survives due to his full body "safety sphere device". The Professor manages to successfully revive everyone killed in the crash using Stem Cells and a "birth machine", except Leela, who enters an irreversible coma. Bender also experiences difficulty during the rebirth; the Professor fits one of his doomsday devices to power him. The device generates excess power, and Bender is forced to continue partying endlessly or else he will explode.

Fry, in his despair over Leela, makes a robot version of her. The Professor is able to generate Leela's personality and memories for the robot, however the robot Leela is horrified to learn of the human Leela's predicament. Leela is unable to be woken by the Professor, and as per her final wishes, is taken to a planet to be eaten by a Cyclops-devouring monster known as the "Cyclophage". At the service, Bender's obnoxious partying wakes Leela, who is confused by the robot Leela. The Cyclophage approaches, and the crew escapes in the ship. As the ship takes off, the Cyclophage attaches itself to the underside of the ship.

Back on Earth, the two Leelas both realize they love Fry, and begin to fight over him. Fry is handed a gun and told to shoot one, but accidentally shoots himself, only to expose that he too is a robot. The Professor then proceeds to explain the situation. Fry, in his attempts to shield Leela to protect her, is almost completely obliterated by the explosion. The Professor attempts to revive Fry in the birth machine, but this does not have any discernible effect. Leela, in her despair over Fry's death, makes a robot version of him and generates his personality for the robot. However, a malfunction causes Leela to be fatally electrocuted, and the robot Fry to be severely burned and lose his memory. Human Fry suddenly emerges from the birth machine, having finally absorbed the stem cells. Robot Fry and robot Leela declare their love for each other, and leave together.

Bender decides he is fed up with constant partying and begins to vibrate with the excess energy. The Cyclophage suddenly emerges, and attempts to eat Leela. Bender's severe vibrations cause one of his eyes to fall out, and the Cyclophage swallows him, believing Bender to be a cyclops. The device explodes, killing the creature. Bender emerges intact and the Professor declares that Bender expended his excess energy. The crew leave in order to celebrate, and Zapp Brannigan emerges from the birth machine.

The three-minute animatic showed at Animation SuperCon in Florida on 4 October reveals the opening scene of the episode.[8]

The Professor is shown working on some sort of experiment in the dome of the Planet Express building, when Fry enters. His body is burned, but he does not remember why. The Professor then recalls what happened: Zapp Brannigan chased the Planet Express Crew into a wormhole, and upon appearing on the other side, they found themselves right in front of Earth. Then the Professor realizes it was the "Panama Wormhole," a channel used for shipping. While trying to return to Earth, Zapp's ship also exits the worm hole, and manages to damage the Planet Express Ship's engines. Then it crashes head first into the ground outside of the Planet Express building, and explodes. During the crash, the Professor activates everyone's "safety spheres," which protect a person from any external harm. The Professor has a full body safety sphere, while everyone else's only protect their heads. The Nimbus then crashes into the ground in the exact same spot as the Planet Express ship. This ends the Professor's explanation, and he then shows Fry what remains of the rest of the crew and Zapp. All of their lifeless heads are orderly hung by hangers on a long bar, with their skeletons dangling beneath them (including Bender).

As the first episode of a new run, the production first and foremost focused on continuing from Into the Wild Green Yonder's cliffhanger ending. David X. Cohen explained in an early interview, before the confirmation was even near, that he did consider what to do with the position they ended in, almost daily,[9] which Matt Groening called "painted [themselves] slightly into a corner".[10] While disagreeing on the ease, they were both in agreement that it could and should be resolved in respect with the film.[9][10]

At the San Diego Comic-Con 2009, Matt Groening and David X. Cohen were asked once again about the issue. Matt Groening wanted to ignore it entirely by then, while Cohen stated that they would address it, but only for a single episode.[11]

In a 28 August interview, David X. Cohen revealed that the first episode was tentatively named "Rebirth",[16] and in an October interview, he confirmed it was the title they were using.[3]

On the Animation SuperCon in Florida on 4 October, David X. Cohen along with the male cast, gave a sneak peak of the first three minutes of the first episode's animatic.[8][17] The original concept was for the story to take place in a new universe, but Matt Groening wanted to do the rebirth instead.[5]

A full color trailer of this episode first aired during the premiere of Ugly Americans on Comedy Central on 18 March, 2010.[18]

[first lines of the episode, Fry comes in with his hair in an afro like in "Hell Is Other Robots"]
Fry: Professor, my Fry-fro's all frizzy.
Farnsworth: Okay.
Fry: That's all.

Bender: [casually, while filing his "nails"] Yeah, we're back.
[Everyone else cheers.]

Bender: [Sounding weak and covered in stem-cells.] Aagh, I'm dying... I need ass-to-mouth resuscitation
Fry: I'm on it.
[Fry moves his head to Bender's ass. Blowing sounds are heard.]
Fry: It's not working.
Bender: [Laughing.] I die happy knowing you fell for that.

The Professor: ...and destroyed both of their short time memories!
Robot Fry: So that's why I'm so amazed of these things I already knew!