Difference between revisions of "The Cyber House Rules"

"The Cyber House Rules" is the forty-first episode of Futurama, the ninth of the third production season and the eleventh of the third broadcast season. It aired on 1 April, 2001, on Fox. Leela finds herself with the opportunity of gaining two eyes to look normal.

The crew is watching Good Morning Earth when the doorbell rings. Fry and Bender's laziness forces Leela to answer the door. She finds what she thinks to be a "doorbell baby", but it turns out to be an invitation to a reunion at her orphanarium. She is at first reluctant to go, since they constantly teased her while she was there, but Fry convinces her that she can rub her success in their faces. Warden Vogel greets Leela, and they reminisce briefly. Fry and Bender are enjoying the buffet, when Leela shows them a photo of her group. She reveals that, although he picked on her, she had a crush on fellow orphan, Adlai Atkins. Leela attempts to show the other orphans how successful she's become, but in spite of their horrible lives, they still lord their two eyes over her. Adlai, however, stands up for her, and she is wooed when she discovers he's a (tall) doctor. While Bender is partaking of the free bar, Warden Vogel pitches adoption. Bender is swayed by the prospect of a government stipend of one hundred dollars per week. Adlai apologizes for making fun of Leela, and to make up for it, offers to give her a prosthetic eye to appear normal. Bender meanwhile shows Fry his new adoptive children, then leaves to pick up his government stipends.

At Planet Express, the Professor thinks getting the surgery is a good idea. Amy also agrees, having had cosmetic surgery herself. Fry, however, is adamantly against it, but Leela decides to get the surgery anyway. At Taco Bellevue Hospital, Adlai unravels the gauze from Leela's surgery (after first having unwrapped the wrong patient), to reveal her new two-eyed look. 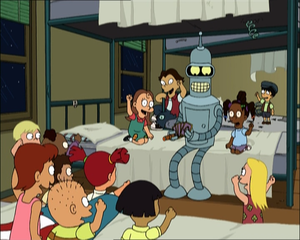 The orphans with Bender.

The entire crew is stunned, and all of them (except Fry) are quite impressed. Leela struggles with synchronized blinking, and after a few tries successfully screws up Hermes' picture. Leela then goes out on the town, showing off her new look (and purchasing several two-eye accessories). Amy teaches her how to apply makeup with two eyes. Leela runs into the blind boy from the orphanarium, and make him feel her two eyes, much to his chagrin. Bender enters with his children, and shows off his check to the crew. The children, however, are hungry. Adlai shows up at PE for Leela's followup exam, and asks her out on a date. Fry points out the he's liked Leela all along, and that Adlai only likes her because she's now got two eyes. Bender takes the kids to a bar, and offers them the free peanuts. After a moment, a cheap floozy hits on Bender. Bender is distracted by all the children hugging him, and the floozy leaves. He threatens the children (with hugging), and they cheer. Adlai takes Leela to the Municipal Arboretum, and gets her an average bouquet from the Altairean Bouquet Tree. Leela is impressed and leans in for a kiss, which Adlai returns, as plainly as possible. Leela takes the crew out to meet Adlai, and Fry still insists that being weird is what makes Leela special, and points out the abnormalities of the rest of the crew. Bender is also at the restaurant with his kids, and after Elzar gives him the check, Bender and the kids run out without paying. Adlai is inspired to have kids with Leela.

Benders kids ask for a story, and Bender reads them "Bender's Arrest Record" by the Police. After the story, he sends the kid to bed and take Fry into the living room to talk. Bender calculates how much he's making from the government stipends, and finds that he's actually losing money. At Adlai's house, Leela and Adlai are doing a jigsaw puzzle, and brings up the prospect of having children again. Leela suggests that, as orphans, they should adopt a child. Because Bender cleaned out the orphanarium, they are forced to go to Bender, who is running his own orphanarium in an attempt to get rid of the kids. Leela and Adlai are unable to decide.

Act V: "If you had kids of your own, you'd understand"

Before they can think about it, NNYPD peace officers Smitty and URL break down Bender's door and arrest Bender and Fry. Bender and Fry (and the children, thanks to Bender ratting them out, according to a deleted scene) are in a jail cell, when Leela asks to adopt one of them, and is told that she may. She sees an orphan with three ears being taunted by the other children and is reminded of her own childhood. She tells Adlai that she wants this one (Sally), and Adlai is reluctant, but Leela insists. He accepts, and promises to give her an operation to make her acceptable. Leela is outraged, saying that she doesn't need an operation, but Adlai points out that Leela had an operation as well. Leela finally realizes that she would've been better off being abnormal, to Fry's delight, and threatens Adlai to force him to remove her prosthetic eye. Bender donates his orphans and his government stipend check to the orphanarium, and they rename it in his honour: The Bender B. Rodriguez Orphanarium. The kids give him a drawing of himself with them, and he crumples it up and tosses it inside his chest cabinet. The children walk away in dejection, but Bender sneakily pulls the drawing back out, smooths it out, and places it on the inside of his door. The children notice this and mob him with hugs.

Warden Vogel: Keep adoption in mind. It's a great way to have a kid without having sex.
Fry: Really? [rolls eyes]

Leela: [to Adlai] Listen, by the end of the day, one of us is going to have one eye!

Albert: Can we have Bender Burgers again?
Bender: No! The cat shelter's on to me!

Bender: O.K. kids, it's nine o'clock, and you know what that means! Daddy's sick of looking at you, so go to bed!

Fry: But you're better than normal, Leela; you're abnormal!

Leela: [After getting the surgery.] I did it! I blunk!
Hermes: And just in time to screw up this picture I took!
Leela: Hooray!!

Smitty: You're under arrest for child cruelty, child endangerment, depriving children of food, selling children as food, and misrepresenting the weight of livestock!
Bender: [As he's being cuffed.] If you had kids of your own, you'd understand.