Difference between revisions of "The Scary Door"

The Scary Door is a program sometimes viewed by the characters on Futurama. It is a spoof of the classic science fiction TV series "The Twilight Zone." 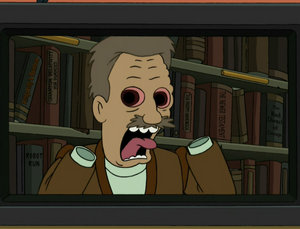 Episode 1: The Last Man on Earth

The Last Man On Earth

[opening credits]
Announcer: You are entering the vicinity of an area adjacent to a location. The kind of place where there might be a monster, or some kind of weird mirror. These are just examples; it could also be something much better. Prepare to enter: The Scary Door.
[Scene: In a desolated world, a man with glasses walks through a library that was somehow spared from destruction.]
Announcer: As per your request, please find enclosed the last man on Earth.
Man: Finally, solitude. I can read books for all eternity!
[He drops his glasses]
Man: It's not fair... (panicked) it's not fair! (calmer) Wait, my eyes aren't that bad; I can still read the large-print books.
[As he reaches for a book, his eyes fall out]
Man: (hysterical) It's not f-... (calmer) Well, lucky I know how to read braille.
[His hands fall off. He screams, and then his tongue falls out. Then his head falls off.]
Man: Hey, look at that weird mirror... 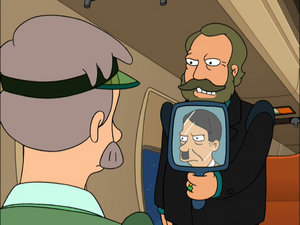 [opening credits]
Announcer: You're entering a realm which is unusual. Maybe it's magic, or contains some kind of monster... The second one. Prepare to enter the Scary Door.
[Scene: An elderly man wearing a green visor exits 3-Eyed Jack's Casino.]
Announcer: Please send the man 'round back and pick up Clyde Smith. A professional gambler who's about to have an unfortunate accident.
[While crossing the street, Clyde is hit by a car.]
[Clyde wakes up in front of a slot machine. He pulls the lever and it comes up with three Bars.]
Clyde: (laughs) A casino where I'm winning? That car must've killed me; I must be in heaven!
[He pulls the lever again, three Bars come up again.]
Clyde: A casino where I always win? That's boring. I must really be... [dramatic] In hell!
[A man enters from offscreen.]
Man: No, Mr. Smith, you're not in heaven or hell. You're on an airplane!
[Man opens curtain, revealing airplane windows. Clyde looks out the window and sees a gremlin on the wing, tearing out the wiring.]
Clyde: There's a gremlin destroying the plane! You've gotta believe me!
Man: Why should I believe you? You're Hitler!
[Man holds up a mirror, revealing that Clyde's reflection is that of Hitler.]
Clyde: No!
[Clyde is transformed into Hitler when he turns to the person next to him.]
Clyde: Eva Braun, help me!
[Eva Braun pulls off her face to reveal that she's actually a giant fly.]
Clyde: [screams] 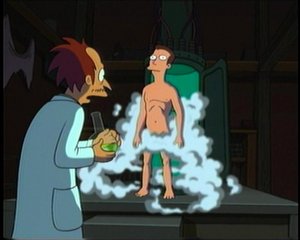 [Opening sequence, objects flying through space]
Announcer: You're on a scenic route through a state recreational area known as the human mind. You ask a passerby for directions, only to find he has no face or something. Suddenly up ahead, a door in the road. You swerve, narrowly avoiding The Scary Door.

[scene: a scientist is in a Frankensteinesque laboratory mixing chemicals in a beaker.]

Scientist: I have combined the DNA of the world's most evil animals to make the most evil creature of them all.

[A pod reminiscent of the ones from the movie "The Fly" opens with a cloud of steam. It clears, revealing a naked human male.]

Man: It turns out it's man. 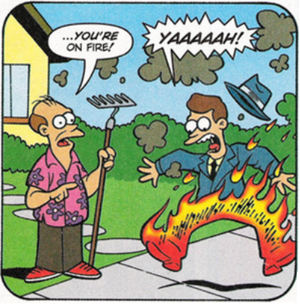 Announcer: Imagine, if you will, a three by seven inch wooden frame -- a frame that's a gateway to a world of imagination. Wipe your mind on the welcome mat. You're about to enter The Scary Door.
[scene: a man in a car]
Announcer: Meet Brad Thompson, a man on his way home from a boring day at the office.
Brad: Man, I wish something exciting would happen... Anything at all.
[A fire truck drives behind him.]
Brad: What's this? A fire truck is trying to pass me? To get to my neighborhood? I'll bet my neighbours house is on fire. I'd better speed up if I want to watch that.
[He gets to his neighbour's house]
Brad: Wait a minute. My neighbours house isn't on fire. But then, what's with all the smoke?
Man: Oh... hi Brad, sorry to be the one to have to tell you but you're on fire.
[Brad is shown on fire]
Brad: Yaaaaah!
[Brad's skeleton is on the floor]
Fireman: We tried to warn him that he was spontaneously combusting but he drove away from us.
Announcer: Official cause of death, third degree burns... actual cause of death, first degree irony!

The comic "Let's Twist Again" (US#028) reveals that the ideas for the Scary Door come from a parallel universe where everything is ironic and there is only one writer for the show.