Difference between revisions of "Underwater-house salesman"

The underwater house salesman attempts to sell the house to Fry and Bender until it was attacked by an octopus (1ACV03). He seems to have experience dealing with giant octopuses and shows no fear when dealing with it. He looks and sounds similar to Sal. He made several cameo appearances in Season 6, such as running an "XXXL and Up Shirts" shop at Comic-Con 3010 (6ACV11) and attending the Parade Day Parade (6ACV19). 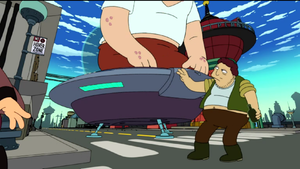 During the Unattractive giant monster's landing on Earth.

Underwater house salesman: Sure, it ain't one of them la-di-da above ground places, but if you like dank forget about it.

[A giant squid starts to attack the house and the salesman gets out a dagger.]
Underwater house salesman: Excuse me, I gotta go "change a lightbulb".