Hell Is Other Robots

From The Infosphere, the Futurama Wiki
(Redirected from 1ACV09)
Jump to: navigation, search

"Hell Is Other Robots" is the ninth episode of Futurama, the ninth of the first production season and the ninth and last of the first broadcast season. It aired on 18 May, 1999, on Fox. It guest-stars Michael "Mike D" Diamond and Adam "King Ad-Rock" Horovitz from the Beastie Boys as themselves in jars, as well as Dan Castellaneta as the Robot Devil. Bender becomes obsessed with electricity, abusing it like a drug. After discontent from his friends, he joins Robotology to purify himself, but his new extremes of sanctity grow into a major irritation for his friends, who decide to make him sin and return to his old self. Quitting Robotology causes him to end up in Robot Hell, and he has to be rescued.

Act I: I've been waiting a thousand years to see a Beastie Boys show!

Fry, Leela and Bender go to a Beastie Boys concert at Madison Cube Garden. Bender runs into Fender, an old friend who is now working for the band. After Fender gets Bender and company back-stage, he takes Bender to a party where robots are abusing electricity, or "jacking on." Bender quickly becomes addicted, and although his coworkers notice his strange behaviour, they can't identify the cause.

However, on a delivery, Bender begins to suffer withdrawal, and takes advantage of a nearby electrical storm in space to get a hit; as a result, the ship is destroyed, and his addiction is exposed. Confronted with the severity of his problem, Bender takes to wandering the streets, until he finds a Temple of Robotology that inspires him to give up his sinful ways. 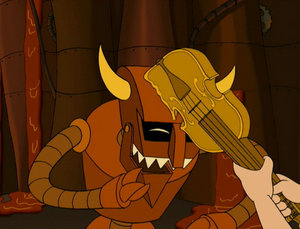 Leela bashes the Robot Devil over the head

Act II: And as a further cost-cutting measure, I have eliminated the salt water cooler

Bender comes to work whistling a happy tune, and tells his friends about his new-found religion. Everyone is shocked and suspicious, but it quickly becomes apparent that Bender is being sincere. At first they support his decision, but his new personality soon becomes irritating: he drags them to his baptism, utters long-winded prayers over dinner, and lets his religion take over every aspect of his life.

In an attempt to return Bender to his old self, Fry and Leela take him to Atlantic City and tempt him with liquor, robbery, and cheap Hookerbots. His resistance to temptation quickly fails, and he abandons his religion for his former debauchery. But the same night, while he seduces a group of fembots in a Jacuzzi at the Trump Trapezoid Hotel, the Robot Devil arrives and takes him to Robot Hell.

Act III: What in Hell happened to Bender?

Fry and Leela find Bender missing, but luckily Nibbler finds and then follows his trail. It leads to an abandoned amusement park called Reckless Ted's Funland in New Jersey, where a fun house mirror is a doorway into an "actual, factual Robot Hell." Meanwhile, the Robot Devil explains to Bender that punishment for sin is something he accepted when he was baptized, and now he must face the consequences, which are all demonstrated for him in an elaborate musical tour of the different levels of hell. When Fry and Leela find them, they have one chance: the Fairness in Hell Act of 2275 states that they can reclaim Bender's soul if they best the Robot Devil in a fiddle contest. Leela volunteers for the contest, but having no musical ability to compete with the Robot Devil's incredible talent, she simply beats him with the gold fiddle. As the three of them escape, Bender steals a pair of wings and is shot with a golden halo, becoming an angel to save his friends' lives, and resolving from then on to always be himself. 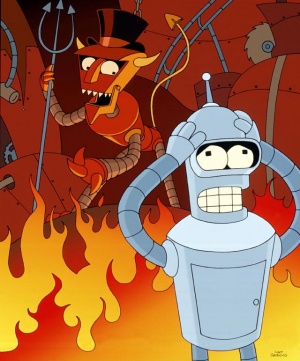 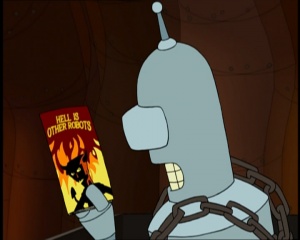 This episode is one of the few to feature its own name within itself.

Bender: Oh, they're tormenting me with up-tempo singing and dancing!

Robot Devil: Sorry, but I hold all the cards here. There's nothing you can do. Now if you'll just sign this fiddle contest waiver...

Bender: Come on universe, you big mostly empty wuss, give me all the juice you got!

Leela: Bender, we didn't mind your drinking, or your kleptomania, or your pornography ring.
Zoidberg: In fact, that's why we loved you.
Leela: But this electricity abuse crossed the line. You almost killed us.
Fry: And you made me feel like a jerk for trusting you. Just like when my friend Richie swore he wasn't taking drugs, and then he sold me my mom's VCR, and then, later, I found out he was taking drugs. You make me ashamed to be your friend. 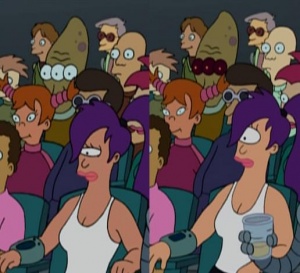 A three-eyed alien in the "Beastie Boys" audience has white eyes, which turn to black between shots. 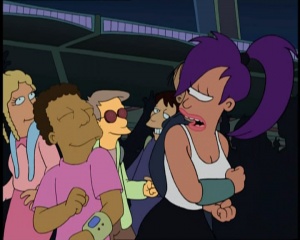 For a brief second during the moshpit, the controls on Leela's wristpad disappear.