Put Your Head on My Shoulders

From The Infosphere, the Futurama Wiki
(Redirected from 2ACV07)
Jump to: navigation, search

"Put Your Head on My Shoulders" is the twentieth episode of Futurama, the seventh of the second production season and the tenth of the second broadcast season. It aired on 13 February, 2000, on Fox. After a romantic picnic trip between Amy and Fry (and Dr. Zoidberg) ends in tragedy, Fry's head is attached to Amy's shoulder.

Act I: "You just assume I can't get a Valentine's Date?" 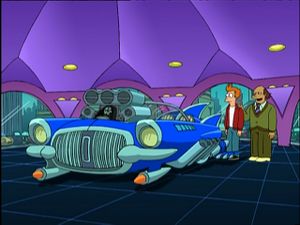 Fry and the Thundercougarfalconbird salesman at the Car Emporium.

Amy decides to buy a new car, and Fry, Leela and Bender go with her. In Bender's case, the visit is mandatory because he has to bring his ass in for servicing, as he has received a recall note with his name (Bender Unit 22) on it - there is the danger of his ass bursting into flame on a low-speed collision. At Malfunctioning Eddie's Rocket Car Emporium, Amy quickly falls in love with the Beta Romeo, with a little help from Victor, the car salesman, while Fry is sorely tempted by the Ford Thundercougerfalconbird. Bender is being serviced in the service department and has some shock-absorbing bumpers installed to reduce the risk of catastrophic butt failure. Bender is not happy with the new part and has it removed, despite the warning of the mechanic. Amy buys the Beta Romeo, and they all drive back to Planet Express. As Valentine's Day is coming, Fry asks Leela out, but she refuses. Amy wants to take out her new car to Mercury, and Fry decides to go with her. They have a lot of fuel-consuming fun with the new car and run out of fuel in a desolate area, where they are stuck for a few hours. They get into talking and realize they have a lot in common, and they end up sleeping with each other. 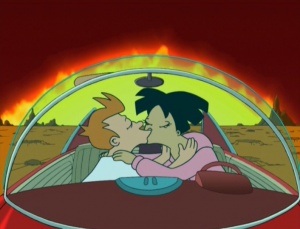 Fry and Amy kissing in the car

Act II: "Fry and Amy go together like a lime and a coconut"

The PE crew is astounded to hear that Fry and Amy are together now, and Zoidberg is especially jealous as he is miserably lonely and desperately poor so he can't even buy romance. This inspires Bender to start a dating service (Benders Computer Dating Service, Discrete and Discreet), after his prostitution ring gets shut down due to anti-pimping laws (which gets Bender a $500 fine and time served). Fry is meanwhile fearing that his relationship with Amy might become too close, and asks Leela if she will come with him and Amy to a picnic on Europa as he doesn't want to be alone with her. Leela refuses, but Zoidberg is happy to join in. On the tour across the moon's frozen surface, Amy is asking Fry what he wants to do on Valentine's Day, and he is preparing to break up with her. For this, he needs a more intimate atmosphere, and lets Zoidberg take the helm of the car. As Zoidberg can't drive, he accidentally pulls the wheel off and there is a terrible accident in which Fry's body is severely injured, but Zoidberg manages to keep his head alive by transplanting it on Amy's shoulder. Whether he wants it or not, Fry is going to spend a lot of time with Amy...

Fry is now temporarily reduced to his head and dependant on Amy to survive, but he doesn't let this stop himself and he finishes his breakup with her. Amy, however, takes it easy and arranges another date for this evening. Meanwhile, Leela is getting desperate and hires Bender's services to arrange a date for her, and some time later. so does Fry who doesn't want to be alone with Amy and her date. They all congregate to Elzar's Fine Cuisine. Amy is meeting with a goodlooking guy named Gary, while Bender has arranged Petunia to be Fry's valentine, and Leela meets Sal. Only Amy's date is taking a satisfactory course, as both Petunia and Sal (and every other date in the room Bender arranged) have to catch their bus - it turns up Bender rounded up his candidates at a bus station to take a bus to Nutley. Now Gary and Amy are planning to get busy in a more private fashion, which is a horrifying thought for Fry. He actually tries to break free from Amy's shoulder, when Leela steps in to save him: she involves Gary in a long, boring conversation so the intimate get-together with Amy is canceled. The next day, Dr. Zoidberg restores Fry's head to his own body, and everything seems to have worked out - except for Bender, who becomes, right in the closing shot, a victim of catastrophic butt failure. 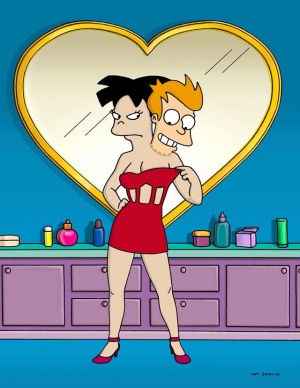 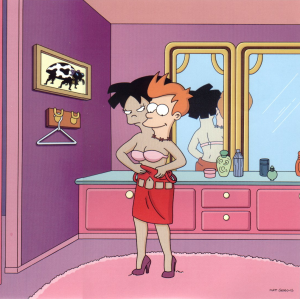 Victor: Hi, I am Victor, and I know many things about unloading cars on beautiful women. [He kisses Amy's hand.]
Leela: Uh-huh. Now tell her she's witty and sophisticated.
Victor: Ah-ah-ah. A gentleman always sells a lady a car first.

Amy: Smeesh, Leela! This car has everything a [She begins imitating Victor's accent.] beautiful woman like me needs! Victor said so.
Victor: Ha ha ha. No dog food for Victor tonight.

Fry: Sorry, I'm not here to buy.
Car Dealer: I understand, and it's wonderful that you don't care whether anyone questions your sexual orientation.
Fry: I care! I care plenty! But I just don't know how to make them stop!
Car Dealer: One word: Thundercougarfalconbird.

Leela: OK, the sticker says 55,000, but we'll only go as high as, say--
Amy: 60,000!
Victor: Oh, I will have to ask my manager. [Victor walks into Malfunctioning Eddie's office.]
Leela: Amy, you don't go up from the sticker price.
Amy: I thought it was an auction. [Through the office window, we see Victor say something to Eddie. Eddie smiles and they both dance. Victor comes back out again.]
Victor: He is not too happy.
Amy: I'm sorry. 80,000? [Malfunctioning Eddie explodes]

Amy: Hey, I'm taking my new car out for a spin to Mercury. Anybody wanna come?
Fry: Yeah, OK. What's the weather like?
Amy: The usual: Boiling lead, oceans of lava.
Fry: So, what? Shorts?

Bender: Congratulations, Fry! You snagged the perfect girlfriend. Amy's rich, she probably has got other characteristics...
Leela: Bender! Romance isn't about money.
Bender: Oh, so it's just coincidence that Zoidberg is desperately poor and miserably lonely? Please!
Leela: For your information, it's because he's hideous.
Zoidberg: Aw...

Fry: Amy, you know how at first you like chocolate but then you get tired of it cause it always wants to hang out and stuff.
Amy: Huh? You don't like chocolate?
Fry: Look, could chocolate just let me finish?

Leela: So... how's business?
Bender: [He opens his chest-compartment, and takes out a 500-dollar bill.] Are you familiar with my friend Al Gore? I'm tellin' ya, losers really get desperate around Valentine's Day!
Leela: Yeah, it's pathetic alright. [He whistles nonchalantly.]
Bender: Dah-di-du-dah...
Leela: [Finally laying down the cards.] How much?
Bender: Five hundred bucks.
Leela: [Without batting her eye.] Done.
Bender: Zapp Brannigan okay?
Leela: No!
Bender: Six hundred.

Leela: You're too late, Fry. I'm sharing Valentine's Day with a very special man. He's not Zapp Brannigan or anything!
Fry: Then I have no choice to do something so pitiful and embarrassing that I'm ashamed to tell you about it.
Leela: Bender's in his office.
Fry: Thanks.

Professor Farnsworth: I still don't understand why you wouldn't let me graft a laser cannon on your chest, to crush those who disobey you! But I guess we're just two different people.

Leela: No, you didn't! You just corralled a bunch of stiffs at the bus station and pocketed our money!
Bender: True. But, in the end, isn't that what Valentine's Day is really all about?