The 3012 phenomenon was a prediction that the world would end in 3012 made by an ancient prophecy (7ACV02). In this year, Bender became the star of a hit TV show on which he terrified the public with the phenomenon (US#060).

A calendar in possession of Planet Express predicted fires, earthquakes and sharksplosions, followed by the end of the world (7ACV02). A weather balloon had foretold these disasters; it also detected the onset of a catastrophic sunspot cycle. This cycle cut off all electricity on Earth, and rendered all electronic devices unusable. In 3012, the cycle began its effect on Earth, leaving New New York in chaos. The Planet Express crew found a Martian stone spaceship, and this spaceship was used to evacuate 30,000 Earthicans chosen by the Contrabulous Choosematron to Mars. It was there that they realized that it was not Earth that would be destroyed, but rather Mars; the calendar was a warning placed by the ancient Martians not to go to Mars, and the cycle's effect on Earth was only temporary.

On 23 June 2011, Futurama co-creator David X. Cohen announced that there would be an episode in Season 7 about someone predicting the end of the world coming in 3012.[1] On 25 April 2012, MSN TV updated their Futurama episode guide - revealing that the episode was "A Farewell to Arms".[2] 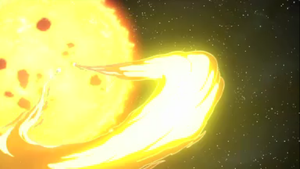