From The Infosphere, the Futurama Wiki
(Redirected from 4ACV13)
Jump to: navigation, search

"Bend Her" is the sixty-seventh episode of Futurama, the thirteenth of the fourth production season and the thirteenth of the fifth broadcast season. It aired on 20 July, 2003, on Fox. To win the fembot Olympic event, Bender changes genders, but finds his new female self in a romantic relationship with Calculon. 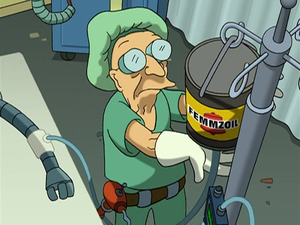 Farnsworth reaching for Femzoil in his operation clothes.

The crew attend to the 3004 Olympic Games. Hermes competes in the Men's 500 meter Limbo contest, as the rest of the Jamaican team have been detained at the airport because of "other interests". Since he is a bit out of shape, Hermes relies on his body-shaping spandex suit the Professor gave him in order to uphold Jamaica's honour and beat his bitter rival Barbados Slim. He almost succeeds, but the suit bursts shortly before he reaches the finish line and Hermes loses. Meanwhile Bender is dreaming of winning a few medals in the bending contests for himself, but as he sees no chance of beating the ultra-powerful manbots, he disguises himself as a fembot and enrols under the name "Coilette from Robonia". He wins five medals, but in order to pass the gender check afterwards, he undergoes a sex change operation/oil change the Professor gives him. The operation is a success and Bender gets to keep his medals, however, he is now female.

As the winner of five gold medals, "Coilette" is an instant celebrity and is invited to Late Night with Humorbot 5.0. She decides to stay female for the time being, although it endangers her ability to change back. At the Late Night show, she meets Calculon who instantly falls in love with her. They go on a date, while Leela and Amy start worrying together with the rest of the crew. Coilette undergoes wild mood swings that are connected with the sex change. Shortly thereafter, Calculon asks Coilette to marry him and she accepts.

Act III: "If I help you with this, do you promise to get out of my gender and stay out?"

Coilette wants to make the wedding a scam to get at Calculon's money, but then realizes she truly loves him and can't bring herself to hurt him. The crew rush to her aid to create a proper ending for the liason which Calculon can deal with: a Soap Opera Death. At the wedding, Leela, Fry, Hermes and Zoidberg stage an elaborate and very stylish death for Coilette so Calculon can accept the loss. Afterwards, the Professor changes Coilette back into Bender, much to the relief of Leela and Amy.

Nations participating in the 3004 Earth Olympiad

Amy: You're making us look like jerks in front of the other genders!

Bender/Coilette: Why don't all of you back off? Can't a girl enjoy herself without being judged? [Bender/Coilette walks off.]
Professor Farnsworth: Oh, dear. Her mood swings are getting wilder. She's becoming a slave to her emotions. Just like all women. Particularly you, Leela. [Leela slaps the Professor.]
Leela: I'm worried about him too, Professor.

Bender/Coilette: Nice try sister. Now if you'll excuse me, I need to meet with my wedding planner. (Shouting) Zoidberg. (Talking) Zoidypoo, please tell me frilly is in this year.
Zoidberg: I saw a frilly cake in here you'll remember all your life. I know I will. Late at night it haunts me with its frosted beauty. Order the cake, damnit!