From The Infosphere, the Futurama Wiki
(Redirected from 4ACV15)
Jump to: navigation, search

"The Farnsworth Parabox" is the sixty-ninth episode of Futurama, the fifteenth of the fourth production season and the tenth of the fifth broadcast season. It aired on 8 June, 2003, on Fox. The Planet Express crew goes to a parallel universe made accessible by Professor Farnsworth's latest experiment.

Shortly afterwards, the Professor calls on the crew to dispose of a box containing the crazy-ass experiment that almost killed him, by throwing it into the Sun itself. He forbids everyone to look into the box for any reason, fueling the crew's curiosity to a critical stage. Hermes chases off the nosy crew members and sets Leela with a gun to guard the box. Fry and Bender mount a serious attempt to seize the box by crawling through the building's steam tunnels, and indeed manage to acquire it. They find it full of junk (unlabeled booze and tangled Xmas tree lights), much to their pleasure, because Leela has foreseen the attempt and planted a fake box so she can guard the real box in peace.

Act II: "Say, I hope you won't think it 'evil' of me to ask how you got that stylish head wound."

The other Professor soon realizes what must have happened: the box contains a parallel universe and is a gateway between the two universes. He suspects that the universe where Leela came from is populated by evil twins and sends the different Leela through the gateway with a gun to round up the other inhabitants. She does so, and the two Planet Express crews (except Hermes) end up facing each other in the other universe. The original Leela and her twin end up fighting and beat each other unconscious, and both crews agree to seek a violence-free solution. They decide to name the universe where the original Leela came from Universe A, while the other universe is Universe 1 (originally Universe B). It seems that a key difference between the two universes is that coin flips have different outcomes, which explains why Leela-1 didn't look into the box and got herself coffee instead while Leela-A did take a look. It also accounts for Bender-1's golden finish and the Professor-1's head scar that he inflicted on himself while experimenting to remove his own brain. Professor-1 has hidden the box with Universe A in it until he is convinced their other selves are not evil, so there is no returning for now. Fry-A and Leela-A are astonished to learn that Fry-1 and Leela-1 are a married couple.

Professor-1 dives into his personal coelacanth tank to retrieve the box with Universe-A in it, but finds it has been stolen - the Zoidbergs have it. In desperation, the two Professors produce further parallel universes, hoping to find Universe-A among them. Dozens of identical boxes are produced by some strange machine, and the crews try to find the proper universe in them. As they are unsuccessful and about to despair, the Zoidbergs enter with the right box, but flee into one of the boxes as the crews give chase. The other universe boxes fall down around the box, making it impossible to determine which one is the right one.

The crew members attach themselves to Universe-1 with cables and explore the boxes that contain weird variations of the Universe. Eventually they meet the Zoidbergs and seize the box with Universe-A in it. They all return to Universe-1 using their ropes, and then rush into Universe-A just as Hermes is about to eject the box into the Sun.

This episode was named #16 on IGN's list of top 25 Futurama episodes. 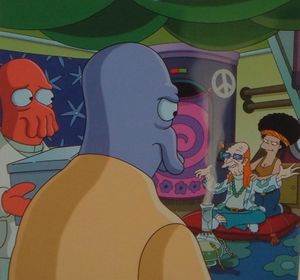 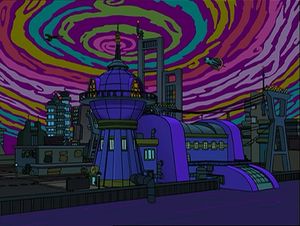 The Planet Express Headquarters as seen in Universe 1

Hermes: Here, Leela. Take this and use it to shoot those guys.
Leela: Right! If they try to look in the box.
Hermes: Whatever.

Hermes-A: Like Granny said: "If you want a box hurled into the sun, you got to do it yourself." God rest her zombie bones...

Leela-1: [Referring to Leela-A.] We're exactly the same! I know all her moves, therefore I have the upper hand!
Prof. Farnsworth-A: [After Leela-A and Leela-1 knock each other out.] Now, now. Perfectly symmetrical violence never solved anything.

Leela-A: Uh, have you Robot-versions of you guys seen any extra Zoidbergs around here?
Robot Fry: Negative! Will. You. Go. Out. With. Me?
Leela-A: Uh, access denied. [Robot Fry's head explodes.]

Leela-1: The idiots have the box!
Dr. Zoidberg-A: [Referring to Dr. Zoidberg-1.] I think she means you.

Transition Announcer: Meanwhile, in Universe-A, Hermes-A heads towards the Sun... A.

Prof. Farnsworth: There. That space-time eversion has given us their box and vice versa.
Leela: So, what you think you just explained to us is that–
Prof. Farnsworth: Correct! This box contains our own universe. [The crew gasps.]
Hermes: Sweet honey bee of infinity!
[Bender takes the box from Farnsworth and shakes it. The building quakes.]
Leela: Bender! Quit destroying the universe!