Into the Wild Green Yonder Part 1

From The Infosphere, the Futurama Wiki
(Redirected from 5ACV13)
Jump to: navigation, search

"Into the Wild Green Yonder Part 1" is the eighty-fifth episode of Futurama, the thirteenth of the fifth production season, the thirteenth of the sixth broadcast season and the first cut from Into the Wild Green Yonder. It aired on 30 August, 2009, on Comedy Central. It guest-stars Seth MacFarlane as the intro singer, Phil Hendrie as Hutch Waterfall and Penn & Teller as themselves. The Planet Express crew goes to Mars Vegas, while Bender is making out with the Donbot's wife.

In the Black Dwarf System, in the deepest part of space, a mystic green wave of light begins to spread. The wave passes through a violet dwarf system in slightly deep space, triggering the beginning of life on an asteroid there.

Cut to the old Mars Vegas, where the Planet Express crew is partying. But the party is soon to come to an end, because Leo Wong is demolishing the city in front of a crowd. Leo explains that they are going to build a new Mars Vegas, bigger and better, out further in the desert.

At the construction site, a group of environmentalist feminists, the Feministas, lead by Frida Waterfall, shows up to protest the construction. To show his appreciation, Leo blows them up, and Frida's female symbol pendant becomes lodged in Fry's brain.

Leela is disturbed by Leo's lack of respect for nature. He defends himself, explaining that he has hired Professor Farnsworth to perform an environmental survey of the construction, but Farnsworth is clearly being bribed by Leo.

A small scum puddle on the construction site is the only breeding habitat of the Desert Muck Leech (Cyprinodon martius). Leo lays a car park over the puddle, but Leela has saved a single specimen.

Due to potential legal issues because of what happened to Fry, Leo gives him a free entry to the Poker tournament. When Leo needs the rest as witnesses, Bender scores them a deal for free suites and free dinner when the new Mars Vegas opens.

At the new casinos, Fry begins to hear other people's thoughts. Out on the street, Fry's condition worsens, as more and more people's voices enter his head, and so he flees into an alley where he meets Hutch. Hutch can also read minds, and gives Fry a tinfoil hat like his own to shut out the voices. Hutch finds to his surprise that he cannot hear Fry's thoughts. Hutch warns Fry about the Dark Ones, and tells him never to speak of his ability.

Meanwhile, the Robot Mafia and Bender are enjoying a theatre of the pornographic art. Bender becomes especially interested in the main act: Fanny. When he meets her at her dressing room, Fanny immediately becomes interested in Bender, but there is a slight hitch: Fanny is Donbot's wife. Despite this, they make out immediately behind Donbot's back.

Elsewhere, Fry wants to try out his new "superpower", and after mistaking it for invisibility, he decides to enter the poker tournament. At Elzar's restaurant in Mars Vegas, Bender reveals the affair with Fanny to the crew. Despite the obvious display to Joey Mousepad and Clamps, Donbot is still not sure that the affair is real. Bender also decides to enter the Universal Poker Championship to please Fanny. Fanny warns him that he isn't lucky enough, but Bender explains he is 40% lucky, due to some of his metal coming from a truckload of horseshoes. Fanny supplies Bender with Donbot's foot which would grant him 70% more luck. In addition to those two kinds of luck, he also stepped on a Leprechaun, which brings him up to 3 kinds of luck, with which he cannot lose.

Donbot is unwilling to jump to the conclusion that Fanny cut off his lucky foot and gave it to Bender, but explains to the gang that he'll be convinced if Bender wins the poker tournament.

At the 3009 Universal Poker Championship, hosted by Penn & Teller, Bender and Fry meet up, discovering that they both have entered. With the other contestants eliminated, it is down to Bender and Fry, but in their final hand, Bender refuses to look at his cards, leaving Fry unable to use his mind reading skills to know what to do. Fry calls Bender's all in. 3 kings and 2 aces are laid out by the dealer, Fry's hand is two aces, giving him a hand of four. Bender, however, has two kings, one being a coaster labelled "King of Beers", giving him a hand of five kings and he wins the championship.

However, Bender's win also means that Donbot has decided to deal with Bender and Fanny. Out in the desert, the Robot Mafia forces them to dig their own graves, after which they bury and shoot them a few times as a warning.

The episode ends with "next time". 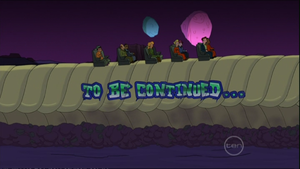 A worm unseen in the film bears an important message