From The Infosphere, the Futurama Wiki
(Redirected from 6ACV08)
Jump to: navigation, search

"That Darn Katz!" is the ninety-sixth episode of Futurama, the eighth of the sixth production season and the eighth of the seventh broadcast season. It aired on 5 August, 2010, on Comedy Central. A group of cats hypnotizes the Planet Express crew, and Amy and Nibbler have to stop them. 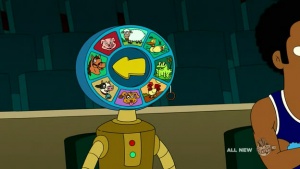 At Planet Express, Amy Wong is anxiously preparing to present her doctoral thesis at Mars University the following morning. The Professor admits that since Amy has been his graduate student for the past twelve years, she was experienced enough to present her thesis about six years ago; he simply neglected to tell her. He advises Amy to relax before tomorrow's presentation, and so the crew take her out to The Hip Joint for a night of fun (and heavy drinking). While there, Nibbler voices a desire to Leela to be treated as a respected, equal member of the crew rather than a common pet.

After partying late into the evening, Amy oversleeps and shows up late (and in her underwear) to defend her thesis at Mars University; she is reviewed by a doctoral panel consisting of Professor Morris Katz, Dr. Ogden Wernstrom, Ethan 'Bubblegum' Tate, and Professor Fisherprice Shpeekenshpell, a robot with a Mattel See 'n Say for a head. After Professor Farnsworth loans her his lab coat, Amy begins her thesis defense: She proposes using a giant ratchet and a length of superconducting wire to harness the power of the tremendous magnetic field created by Earth's rotation, creating a perpetual motion machine that could provide an abundance of free energy. However, Amy's presentation is interrupted by Professor Katz's cat (to which Amy is highly allergic), and the panel members scoff at her implausible proposal, denying her doctorate.

Back on Earth, Katz's cat emerges from within the Planet Express ship, having stowed away on the return trip from Mars. The other crew members immediately become entranced and fawn over the adorable feline, but Amy is still bitter about its interference at the university and having been denied her degree, and Nibbler is jealous of the attention that Leela gives to the cat instead of to him; he says that the cat should be watched carefully, claiming that "nothing acts that cute without some ulterior motive". Amy and Nibbler both spy upon the cat, but fail to find signs of anything sinister. They are ready to admit that they may have misjudged the cat when they hear an entranced Leela refer to the cat as "my lord" and say that Amy and Nibbler represent a "tewwible thweat," and must be "spayed and neutered, wespectivewy". 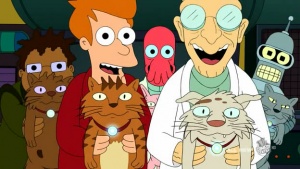 All of the crew except Amy and Nibbler are seduced by the cats' cuteness.

The cat meows out a rhythmic signal which summons a pink flying saucer shaped like a cat's head. Amy and Nibbler rush to tell the other crew members that the cat is evil, only to find that they all have cats of their own, and are also being mind-controlled. The cat saucer lands in the Planet Express hangar, where the crew begins unloading supplies, including an enormous ball of yarn and a large amount of cobalt; it's obvious that the cats are using the crew to construct something in the basement, but when Amy and Nibbler try to investigate, they are told that no one without a cat may enter. They decide to travel back to Mars University in order to interrogate Professor Katz and find out what the cats are up to, but when they burst into his office, they discover that Katz is nothing more than a life-sized marionette rigged to be operated by a cat. Amy realizes that the cat itself is Katz, and is angry that she was denied her degree by a "fuzzball".

The two return to Planet Express to find the door to the basement ajar and unguarded. Upon investigating, they discover that the cats have implemented Amy's thesis as an actual model, building a large ratchet above the molten crater in the cellar, and substituting the superconducting wire with a length of yarn that runs down into the Earth's core. Amy sneezes, accidentally revealing her and Nibbler's position, and they are confronted by Katz in control of Leela's body.

Katz explains that all cats originated from the planet Thuban 9, where they lived a pleasant, lazy existence. However, Thuban's rotation gradually began to slow down. This was initially beneficial, as it provided longer days and nights for napping, but eventually Thuban's rotation came to an almost complete stop, resulting in large differences in temperature on the two hemispheres of the planet (due to one side being exposed to constant sunlight, and the other shrouded in darkness). Thuban scientists searched until they found a planet with the proper orientation and magnetic field: Earth. Thuban scouts landed on Earth in 3500 B.C., and were worshiped as gods by the ancient Egyptians. The Thubans built an enormous antenna - The Great Pyramid of Giza - to siphon off Earth's rotational energy and beam it back to Thuban, but the Thubans grew accustomed to being pampered by the Egyptians, until they became fat and domesticated, and the knowledge of how to save Thuban was lost... until Katz heard Amy's thesis. Amy is furious that Katz not only mocked her research, but stole it for himself. Katz orders the Professor to open a large can of cat food; the sound of the can opener is broadcast throughout the city, causing thousands of cats to plaintively rub up against Planet Express headquarters. The static charge they generate is channeled down into the molten crater, which causes the Earth's rotation to begin slowing down.

Act III: "Enjoy being broiled alive by the sun, and also the dead bird we've left in your slipper." 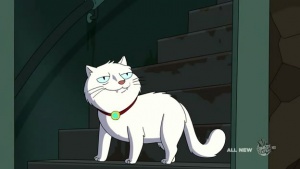 After taking the Earth's energy, the Thubanians leave for Thuban 9.

The Planet Express crew members turn the giant ratchet, gradually slowing the Earth's rotation. Nibbler theorizes that the space cats must be using some sort of "super cuteness" to hypnotize them; he tries to counter it with a pleading expression of his own, but to no avail. The Earth at last comes to an abrupt halt, transmitting its rotational energy to Thuban, and inertia from the sudden stop causes several landmarks and land masses to shift position. The crew members are snapped out of their hypnotic trance, and the space cats depart. The crew attempts to turn the ratchet in the opposite direction in order to restart Earth's rotation, but the ratchet doesn't budge.

As the Earth's western hemisphere slowly begins to roast, Amy says that the ratchet can only apply force in one direction; she laments having ever come up with the concept for her thesis. The Professor consoles her, saying that technology itself is neither good nor evil; it's how it's used that's important. Amy agrees that science must continue moving forward... and realizes that's the answer. She explains that while they cannot turn the ratchet backward, they can continue turning it forward, which will cause Earth to begin rotating again; the planet will be turning in the opposite direction than it was beforehand, but that should make no difference. The plan is quickly undertaken, but the crew is unable to turn the ratchet quickly enough until Nibbler dresses up in his naval uniform (which bears a striking resemblance to a child's sailor suit) to motivate them. This does the trick, and Thuban's energy is siphoned back to Earth, kick-starting the planet's rotation (and causing Thuban to double its angular velocity). In recognition for having proved her thesis and saving the planet, Amy is awarded her doctorate in Applied Physics (as well as a sportsmanship award that Tate found in his glove compartment); Nibbler, still in uniform, also makes his peace with Leela, gratefully curling up in her lap to receive her affection. The crew returns to Planet Express headquarters while, for the first time, the sun sets in the East.

"That Darn Katz!" originally aired on 5 August, 2010 on Comedy Central and was viewed by an estimated 1.950 million viewers receiving a 1.3 rating/2% share in the Nielsen ratings and 1.0 rating/3% share in the 18-49 demographic, going down slightly from the previous week's episode.[1]

Zack Handlen of The A.V. Club enjoyed the episode, rating it an A-, stating that the jokes were strong throughout the episode.[2] Handlen felt the episode was "a return to pure wackiness" and found it a nice change of pace from the more emotional issues of the season.[2] He particularly praised the season's continuation of unlikely pair-ups in Nibbler and Amy, feeling that both received good character development from the episode.[2] Alex Zalben of UGO.com likewise enjoyed the use of both characters, feeling that "it paid in such great character dividends. Amy manages to prove she’s not just a bunch of eye candy, and Nibbler finds out it’s not so bad to be cared for by Leela after all." He concluded that "That Darn Katz!" may not have pulled on the heart strings like the last two episodes, but this one was firing on all cylinders – and we need episodes like this, just silly larks about cats taking over the world, to give us breathing time between the crying jags."[3]