The Mutants Are Revolting

From The Infosphere, the Futurama Wiki
(Redirected from 6ACV12)
Jump to: navigation, search

"The Mutants Are Revolting" is the one hundredth episode of Futurama, the twelfth of the sixth production season and the twelfth of the seventh broadcast season. It aired on 2 September, 2010, on Comedy Central. It guest-stars Mark Mothersbaugh as himself. After Leela is banished to the sewers along with the other mutants, she and the Planet Express crew lead a revolution for mutant rights.

The episode is one of few which show large political and sociological change in the Futurama universe, which had effects on many following episodes. 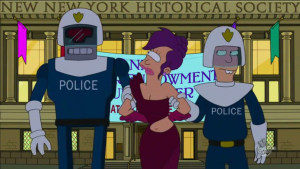 Leela is deported to the sewers when Fry reveals that she is an illegal Sewer Mutant.

The Planet Express crew has been hired for their 100th delivery, which is delivering a soufflé. For this occasion, Bender plans the party of the millennium. Mrs. Astor, the addressee, lives on the Waldorf Asteroid, and so the crew flies there. Once the mission is complete, she invites Fry and the Professor to her fundraiser in the New New York Historical Society building. Fry invites Leela along, but, during the fundraiser, which supports the United Mutant Scholarship Fund, Fry accidentally reveals to the guests that Leela, who felt outraged at the thinly-veiled racist treatment dispensed to mutants, is not an Alien, but rather a Sewer Mutant, who is living illegally on the surface. Leela is banished to the sewers and sees the horrors of living down there. In an attempt to rectify his mistake, Fry, along with the rest of the crew (except for Bender), go to Citihall. Due to another of Fry's blunders, Mayor Poopenmeyer finds out that they knowingly harbored Leela, and sentences them to 2 weeks below the surface. Meanwhile, Bender is throwing a great party with a lot of people. However, when he realises that he misses the rest of the crew, he orders everyone out and wallows in self-pity. Fry thinks living beneath the surface will be a good thing as he will now understand what being a Mutant feels like. Leela is angry at Fry (and all surface people for that matter) and states that if he wants to understand he should jump in Lake Mutagenic and become one.

Act II: "You are all surface." 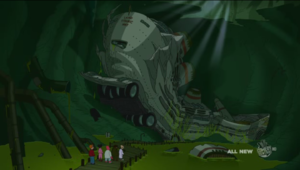 Fry, Amy, Zoidberg, Hermes and the Professor find the remains of the Land Titanic.

Fry comes up with an excuse not to jump and Leela is left angry at him. Whilst walking in the sewers, the crew stumbles on the Land Titanic, a land bus in the shape of the Titanic, which struck a mail box and sunk beneath the surface in 2912. After looking through the ship for a while, they find a safe containing a rare Quantum Force Gemerald, and a list of passengers on board the vessel, including Mrs. Astor's late husband. The crew decides to stay in one of the cabins. Fry, unable to sleep, walks to the toxic lake. Leela, feeling guilty about how she treated Fry, goes to look for him to apologize. She finds him and tries to stop him, but Fry, thinking she's still mad at him, jumps in anyway. She goes out on the lake and pulls him out, only to find now that he is severely mutated. Having had enough of the situation, Leela, along with Fry and the rest of the crew, starts a revolt against the street dwellers. Fry returns to the surface for Bender, so that he can bend the West Side Pipeway to send all the sewage back up the pipes. This leads to the streets of New New York being covered with sewage. Mrs. Astor demands something to be done, and the Mayor orders an Antarian to send all the waste to Madison Cube Garden.

Act III: "What goes down must back up!" 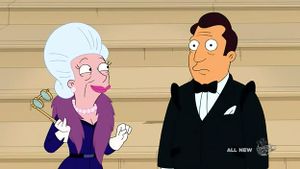 Mrs. Astor and Mayor Poopenmeyer decide how to handle the Devolution Revolution.

With Leela in charge, the Mutants go up onto the surface and demand equal rights. Mrs. Astor orders her butler to fire an I See BM missile, which misses the Mutants and hits Madison Cube Garden, sending a tidal wave of sewage at them. Just before they are covered with sewage, Fry appears and uses the jewel to separate the sewage (emulating the Biblical scene with Moses and the Red Sea). Fry reveals to Mrs. Astor that they found the wreckage of the Land Titanic, along with a list of passengers, which included Mutants. Fry reveals an old and aged mutant: Leela's maternal grandmother, who was a young worker on the Land Titanic when it sunk. She reveals that Mr. Astor gave his seat up for her and her mother. Upon learning this, Mrs. Astor asks for the Mutants to be allowed to the surface, to which Mayor Poopenmeyer agrees. Leela states she now has the stomach to kiss Fry for all he's done. When they kiss, Fry and the body of another Mutant are separated. It turns out that Mr. Astor fell into the toxic lake and mutated when the Land Titanic sunk, and, when Fry jumped into the lake, he lodged himself into his mouth. Mr. and Mrs. Astor are united once again and hug. The crew returns to the Planet Express headquarters with Leela's family and celebrate their 100th delivery. 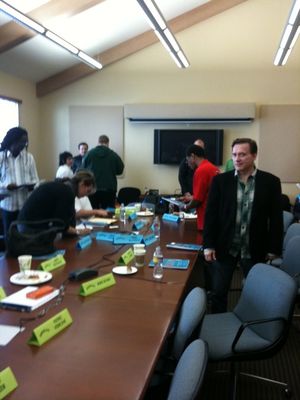 The table reading of the episode, with Billy West to the right.

A photo of Mike Rowe's production script was uploaded by Mike Rowe onto his Facebook page. The cover of the script highlights it as the 100th episode, as well as revealing the title, "The Mutants Are Revolting". This episode was dedicated to the memory of Alex Johns, a producer of Futurama who passed away at 43 years old.

In its original American broadcast, the episode was viewed by an estimated 1.792 million households.[1] 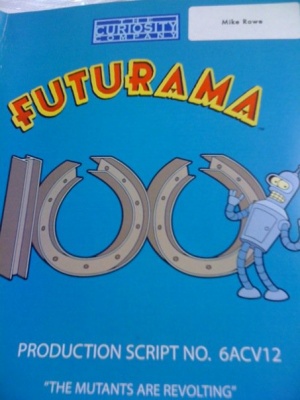 The cover of the script for the episode.

Farnsworth: We've been hired to make our 100th delivery.
[The crew cheers.]
Zoidberg: 100!
Hermes: That's almost 10 per year!
Bender: This calls for a party, baby! I'm ordering a hundred kegs, a hundred hookers, and a hundred Elvis impersonators who aren't above a little hooking, should the occasion arise!

Mrs. Astor: A Farnsworth, you say? Well, if I'm not mistaken, the Farnsworths have been in New New York for almost two hundred years.
Farnsworth: Yes, I have.

Narrator: Far beneath the everyday rumble of limousines and poodle feet, there toil a downtrodden people even less well off than the upper middle class.

Leela: Let's go. If I say one more thing, I might say it with my evening boot.
Mrs. Astor: Well! Rarely have I never!

Leela: Oh, Mom, Dad, I can't believe I have to spend the rest of my life in this hellhole. [She pauses as her parents look shocked.] I'm sorry.
Turanga Munda: It's okay, sweetie. Now that you're here, this hellhole feels more like a nice, regular hole.

Munda: Look, Leela, there's Old Filthful. [She points to a geyser. It shoots up sewage and mutants take pictures before being covered by the sewage.]

Leela: Look at that lake. One dip in that toxic muck and your DNA will be permanently mutated. You'll grow a camel hump or a Zoidberg face.
Zoidberg: Urgh!

Farnsworth: It's a priceless quantum-force gemerald. [He uses it to blast the cruise director, turning the skeleton to an ash stain on the wall.]
Zoidberg: What's that enscribbled on it?

Fry: Yeah, I'll never know love like that. Leela hates me now. [He sniffles.] [Voice breaking.] Did you guys know I have a crush on Leela? [The Professor slaps him with the cruise director's arm.]

Turanga Munda: What's a matter, Leela? You've hardly touched your toilet clams.
Leela: [She sighs.] Maybe I was too harsh on Fry. He didn't ruin my life on purpose.
Turanga Morris: Things will work out, honey. Now here, have some more of what looks like lemonade. [He fills Leela's glass with a yellow liquid.]

Fry: My fellow mutants, until recently, I dwelt on the surface where a man can gaze up at the sky in wonder without a wet clump falling in his mouth.

Leela: Mom, why have I never heard this?
Munda: [Whispering.] My mother's nuts.

The Westside Pipeway is a reference to the Great Machine in Metropolis. 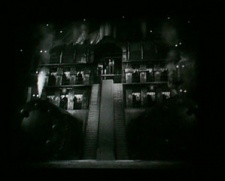 The Great Machine in Metropolis. 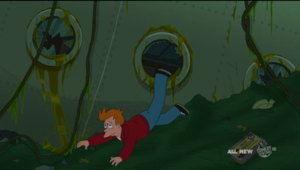 A priceless can of Angry Norwegian (bottom right) is seen in the sewers. In "A Fishful of Dollars", Fry had the last known can in existence.