From The Infosphere, the Futurama Wiki
(Redirected from 6ACV16)
Jump to: navigation, search

"Law and Oracle" is the one hundred and fourth episode of Futurama, the sixteenth of the sixth production season and the fourth of the eighth broadcast season. It aired on 7 July, 2011, on Comedy Central. Fry quits his job and becomes a police officer assigned to the Future Crimes Division.

Act I: "I'd like to enroll in Police Academy."

After being sent on yet another prank delivery, Fry becomes disillusioned with his job as a delivery boy. At Planet Express, the crew witness officers Smitty and URL subdue Roberto, and Fry decides that joining the police force would be a more fulfilling role. He resigns at Planet Express, and applies at the Police Academy, from which he graduates.

Act II: "Ever heard of the Future Crimes Division?"

Upon joining the force, Fry is paired with URL. The pair soon make a major arrest, and are rewarded with a promotion to the Future Crimes Division. The division works to prevent crimes from occurring, by using an "oracle" named Pickles to calculate the future and predict crimes in advance.

Meanwhile, at Planet Express, the crew struggle with the loss of Fry. Leela and Bender are sent on a delivery to Pandora, the "3-D planet" (meaning that it's depicted as an anaglyph image). Without Fry accompanying them, the two find it difficult to be in each other's company. Professor Farnsworth, Amy, Hermes and Doctor Zoidberg find working at Planet Express to be boring without Fry's antics. At the precinct, Fry receives a vision of a future larceny, and discovers that the culprit is Bender.

Act III: "Are you the calloused working man I ordered?" 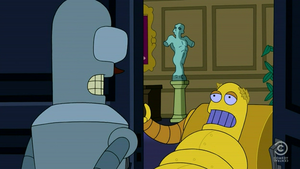 Hedonism Bot lets the thieving Bender in his house.

Fry questions Bender about the details of the crime, hoping to prevent him from committing it. Instead, Fry inadvertently informs Bender about the target of the crime; a priceless bottle of strong malt liquor stored in Hedonism Bot's wine cellar. Upon examining the vision in closer detail, Fry sees that he will fatally shoot Bender to prevent him from stealing the bottle. He decides that he will deliberately not shoot Bender, which causes a vision of an alternate future to be created, in which Bender escapes. The alternate vision shows that Bender will share the stolen liquor with the crew at Planet Express, poisoning and killing all of them.

Bender arrives at Hedonism Bot's mansion, and proceeds to the cellar. Bender obtains the bottle, but is stopped by an armed Fry. Bender declares that he will not steal anything, and Fry exclaims that the oracle was wrong. Suddenly, Pickles appears, aiming a gun at both Bender and Fry. Pickles reveals that both visions were a set-up to allow him to steal the liquor, and frame Fry and Bender for the robbery. Pickles states that he wants the liquor to destroy his human brain cells, as he finds his precognition to be an unbearable burden. Fry attempts to shoot Pickles, but the bullet strikes Bender, knocking him down. Pickles shoots Fry down, and proceeds to drink the liquor, successfully damaging his brain and precognitive abilities. The Chief and URL choose this moment to appear, and Fry and Bender stand up and expose their bulletproof armor. They reveal that they became aware that Pickles was intending to commit a crime, because Bender would never share anything with anyone, thus realising the vision Pickles had shared was an attempt to deceive them.

Fry receives his investigator's shield for stopping Bender, but is also fired for tipping off Bender in the first place. The Professor welcomes Fry back to Planet Express, promoting him to "executive delivery boy". Hermes notes that the "executive" title is simply a psychological trick to make Fry feel good about himself (and immediately after, the end credits show the Executive Producers).

During May and June 2011, Countdown to Futurama released three items of promotional material for the episode: concept art of the police station's future crimes division on 20 May, part of the storyboard showing Fry be pranked by Ipgee, Terry and Lou on 21 May, and a video clip showing Fry and URL in a light cycle chase in Circuit City on 16 June. 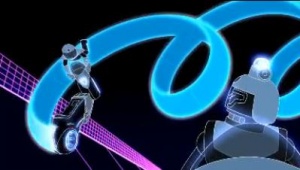 A screenshot from the chase scene which is an obvious Tron parody.

Police officer: Yeah, that's great. Now can you actually turn on the ignition?
Sound Effects 5000: I don't have any hands!

Chief O'Mannahan: [In the locker room topless.] Congratulations on your big bust.
Fry: You, too.