A Terrifying Message from Al Gore 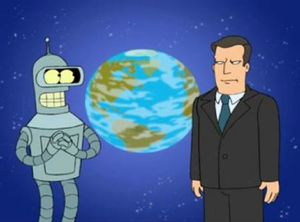 Al Gore warns us about global warming; however Bender interrupts saying it's better for robots because there will be more beer for them. Gore continues to warn us until Bender belches out polluting gases. After finding out Gore is in a movie, Bender questions who he plays, but later decides it is boring because there is no action. Gore has had enough and hits Bender continuously with a blernsball bat. Gore finally reminds us to recycle, with Bender in a recycling bin.

Bender: What do you play? A burned out cop, a street wise pimp?