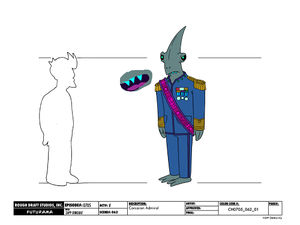 Zapp: Now, Admiral, in exchange for your promise not to attack us, we will grant you exclusive fishing rights in Supernova Scotia.
[A universal translator makes strange sounds. Kif looks at it. Admiral Chew - who has grabbed his speaker - makes similar sounds as he shrugs.]
Universal translator: Well, okay.