Canada is an Earthican country in the 21st century, and is possibly still a country in the 31st century, its capital city was Ottawa. Not much is known about the country, but it was a participant in the 3004 Earth Olympiad. [4ACV13]

In an alternate timeline, Great Britain had won the American Revolutionary War in 1775 and rules all of North America, such as the United States, Mexico, and Canada itself (now called West Britannia) in the 31st century. [6ACV23]

The French language was widely spoken in Canada and France, but went extinct sometime after the 21st century. Currently, the primary language in Canada is the English language.

Pine trees (Pinus xmas) at first existed in Canada in the 21st century, but went extinct by the year 2202 during the Fifty-Year Squirts, when they were all chopped down to make toilet paper. [6ACV13] 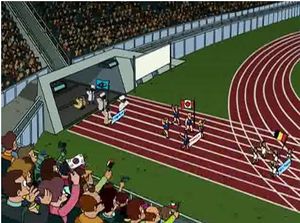