For the planet, see Earth. For the presidency, see President of Earth. 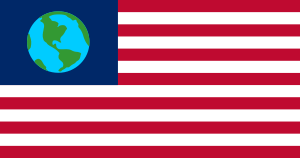 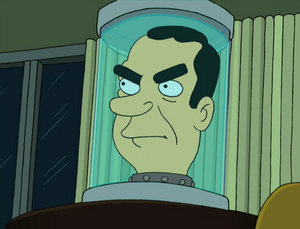 The Earth government is the ruling body that controls the planet Earth. Its current president is Richard Nixon. Its flag suggests that the United States of America may have fought the rest of humanity to rule Earth, as it is unlikely the rest of the world would settle for such a flag, or to have its government placed in Washington DC. This is also indicated by the fact that Richard Nixon has to defend himself when questioned if he can take office again. This could be because he had been President of Earth before, but is more likely a reference to his US Presidency.

However, it is likely to suggest that other nations on Earth still exist as sovereign states or are treated as states or provinces, as they all still have seats in the United Nations building in New New York, which could serve as a sort of planetary capital, with the Washington D.C. Capital as the home of representatives from the Earth and its colonies. In some aspects, the Earth government only seems to control military and foreign affairs, though also taxes on federal level.

Accordingly, Earth's most preserved right is freedom, and the freedom to do anything and say anything. If so, then the entire concept of Career Chips seems to contradict this point, as people are required to do their jobs as it is the law

Earth seems to still use the 1,200-year old U.S. Constitution, but over centuries it has undergone at least 67 amendments (the 67th being that a witness can refuse to testify if threatened that his organs will be cut out and made into hamburger.)

Where the government is mentioned.