The French language (la langue francaise) is a language spoken widely in France, among other former regions of the French Empire in the 21st century, however by the 31st century, the language has become extinct, despite wide former International recognition.

This serves for a joke in numerous episodes. However, despite the assumption that French is dead, the language does appear on occasions where it is certainly not unknown to people who hear it, but this may be considered that French had gained a status like Latin has in the 21st century. 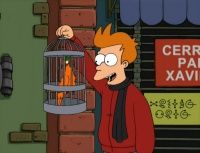 These are appearance with the French language, and not reference to French culture in general.