This article is about the character. For the hairstyle, see Fryfro.

Frydo is Philip J. Fry's alternative persona in Cornwood. At first, he appears like his real-world counterpart and only Titanius Anglesmith refers to him as Frydo. Later, he becomes more sinister, as well as becoming more decrepit in appearance. He was a member of the Fellowship (BG).

He and Leegola teamed up with Titanius Anglesmith and the Great Wizard Greyfarn to try and end the evil reign of Momon by throwing the Die of Power into the boiling plastic from whence it came. Along the way, they met up with Gynecaladriel, queen of the water-nymphos, who seduced the guard of the Cave of Hopelessness so that they could proceed.

When he used the Die of Power to defeat the Tunnelling Horror, he became obsessed with it, beginning his transformation into a sickly pale creature and calling the Die 'the dodecalicious'. He attempted to kill Titanius and ran away to the swamp, where he met the living decapitated head of Zoidberg. Together, they set off to the Geysers of Gygax, intending to destroy the Die.

Frydo's attempt to destroy the Die triggered the climax of the alternate story, culminating in a battle between a Frydo dragon and a Momon dragon. 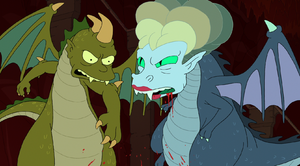 Frydo: So it's all come down to this: a dungeon... and dragons!