From The Infosphere, the Futurama Wiki
(Redirected from Hedonism bot)
Jump to: navigation, search

Hedonismbot's behaviour resembles that of a rich decadent Roman noble of ancient times, and he is a great patron of the opera with his very own box in the Metropolitan House of Opera - he even commissioned Fry to write an opera in which Fry would perform the Holophonor (4ACV18).

Hedonismbot was to be married to a house in the suburbs in July of 3010, but the night before, he held a bachelor party where, due to a nuclear powered stripper malfunctioning, he was the only survivor. It is unclear if he was married or not, but as evidenced by a party in September, his hedonistic ways of promiscuity have not changed.

In a season three commentary, Matt Groening points out the importance of the name being Hedonismbot and not Hedonistbot - he is not only hedonist, he is the actual personification of hedonism. 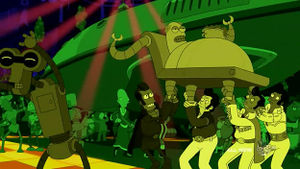 Bender: Look, I enjoy life and its pleasures as much as anyone here, except perhaps you, Hedonismbot. [Hedonismbot eats grapes in a very sloppy manner.] But we need to be shut off, especially you, Hedonismbot!
Hedonismbot: I apologise for nothing!

Announcer: Please take your seats for Act 2.
Hedonismbot: But I'm not done vomiting!

Hedonismbot: Surgery in an opera? How wonderfully decadent! And just when I was beginning to lose interest... Djambi, the chocolate icing!

Hedonismbot: Hello, handsome. Might I procure your services?
Bender: Uh, what do I have to do?
Hedonismbot: Oh, nothing sordid, I assure you! Simply vomit on me, ever so gently, while I humiliate a pheasant. [Bender begins to retch.] Save it for the boudoir!

Hedonismbot: I too have known unconventional love. Perhaps you and I... and Djambi, can get together and compare notes sometime.

Hedonismbot: Let us cavort like the Greeks of old! You know the ones I mean.

Hedonismbot: [Picking up one of Farnsworth's doomsday devices.] What does this one do?
Farnsworth: That one kills everything everywhere.
[Hedonismbot drops the device.]
Hedonismbot: How delightful!

Hedonismbot: It seems Bender hates humans the way I hate having my nipples polished with industrial sand paper.

Hedonismbot: I shan't touch them until I have Djambi lock the absinthe and ether away.

Hedonismbot: Your latest performance was as delectable as dipping my bottom over and over into a bath of the silkiest oils and creams.

Hedonismbot: Ooooooo! Room for one more?

Hedonismbot: Everywhere I looked, there were piles of bodies. And then the explosion struck.
[Hedonismbot begins to laugh, but it crumbles into uncontrollable sobbing.]

Bender: Everyone leave! I need to be alone!
Hedonismbot: Alone with me?
Bender: I said scram grapey!

Hedonismbot: Well, I shall stay here for the decadence. There's no debauchery like end-of-the-world-debauchery! Your lips, my lips, apocalypse, oo-whoo!