The Malachi family was a Shrimpkin species family who worshipped the Metal Lord, Bender, before they were killed in a nuclear war, which began when the people living in Bender's ass stopped believing in the Metal Lord. Voiced by: Maurice LaMarche
Trivia: Malachi was chosen by Bender to explain what happened in the village and to send messages of what Bender wanted. He lost his arm while building a beer tower for Bender.
Quote: I am Malachi. It means 'he who really loves the Metal Lord'.
See also: Category:Prophets 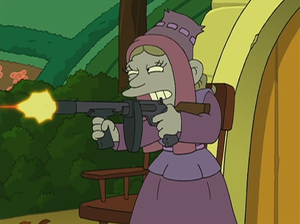 Voiced by: Tress MacNeille
Trivia: Malachi's wife lived in peace with Malachi until there was organized crime so she bought a machine gun.
Quote: Malachi Jr! Nooooooooo! 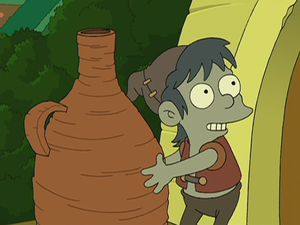