Because it did not run on electricity, and was powered with the help of snakes, it was able to be and was used to evacuate Earth during the events of the 3012 phenomenon. Piloted by Zapp Brannigan, its flight to Mars was successful. The ship was later dismantled and rebuilt as a monumental statue entitled Heroes, honoring those who were thought to be doomed back on Earth. 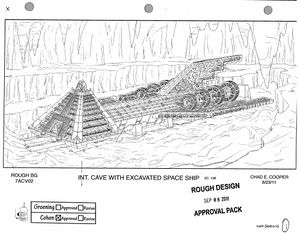 Concept art of the Martian stone spaceship released by Countdown to Futurama.

The Martian stone spaceship was first seen in a design released by Countdown to Futurama on 11 May 2012.[1]