From The Infosphere, the Futurama Wiki
(Redirected from Miscellany of BG)
Jump to navigation Jump to search

This article is about the trivia, the quotes, the references, etc. appearing in Bender's Game. It does not, however, include DVD information, character listings and cast information.

It is a separate article due to the fact that the amount of information to deal with in a trivia manner is huge when compared to a regular episode.

[Bender jumps next to Nibbler's litter box and startles him.]
Bender: Foolish leprechaun, I scoop your treasure in the name of the fancy men. 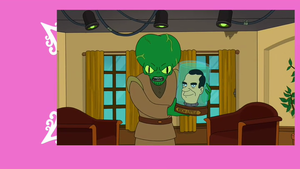