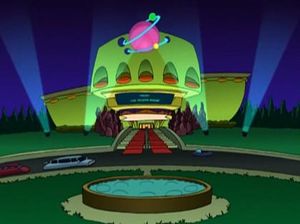 Where it was held

The Miss Universe Pageant 3001 was the only known Miss Universe pageant in Futurama, and was won by Miss Vega 4, Gladys Lennox. She won a bouquet of flowers and the atomic tiara. It was held in 3001 on an unknown date, but it is known that it was held a day before Miss Parallel Universe pageant. An unknown amount of people were competing, though it was known that 10 were in the finals. Bob Barker's head was host.