From The Infosphere, the Futurama Wiki
(Redirected from Nibblonian)
Jump to navigation Jump to search

The Nibblonians are the oldest known species in the universe (being that they had existed for 17 years before the creation of the universe). They stand about one foot tall and have two large eyes, as well as a third eye on an antenna in the center of their foreheads. They have black fur (leaving them prone to hairballs), with pale yellow circles on their bellies and around their mouths. The males have fangs but the females don't. The Nibblonians are widely considered to be the cutest race to ever exist, though this is something they resent. 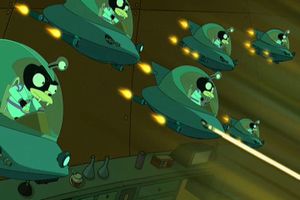 The Nibblonians are a proud, ancient race, their history extending 17 years before the universe existed. However, this can be explained with the loop of time and the possibility that their race grew old in a different universe before coming to ours. Brilliant and powerful, since the dawn of time they have battled their ancient nemesis, the Brain Spawn.