Not to be confused with Old Man Waterfall.

The old man apparently spent most of his life queuing in front of the Central Bureaucracy. In 3001, he was still waiting for his birth certificate. [2ACV11] Several years later, in 3010, he finished his waiting and asked for a death certificate, ironically dying from an apparent heart attack immediately afterwards and, even more ironically, at the wrong building. His death did not cause any major reaction, as the woman serving him calmly stated that Building C handled death certificates and the man behind him merely stepped over his corpse for his serving. [6ACV06] 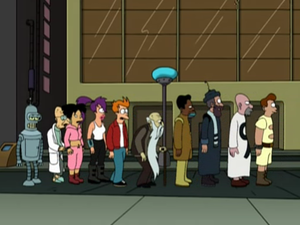 In the middle, queuing.

Old man: [The line moves backwards.] Oh great. Someone had a baby.