From The Infosphere, the Futurama Wiki
(Redirected from Omicron Persei VIII)
Jump to: navigation, search

Omicron Persei 8 is a planet situated about 1000 lightyears from Earth, in orbit around the star of Omicron Persei. The rulers of the planet are Lrrr and his wife Ndnd. Its surface seems to consist mainly of deserts. It is the home world and capital of the warlike Omicronians, the single greatest threat Earth and the entire Democratic Order of Planets are facing. It seems to have a small, asteroid-like satellite. [1ACV12] In addition to this, there are hundreds of small moons in the planet's low orbit. [7ACV16]

In 3017, Fry travelled to Omicron Persei 8 to retrieve an artifact that would help clear the universe of hypnowaves. Lrrr, upset because he was using the artifact to steal cable channels from Earth, invaded New New York, and wouldn't leave until President Nixon turned Fry over to him. The Omicronians were surprised that the Earthicans put up such a fight, and decided to call off their attack. However, Lrrr and Ndnd remained on Earth, along with a replica of the Omicronian Palace and several other Omicronian buildings.

The Omicron Persei system contains at least 27 planets, as Omicron Persei 27 has been mentioned and the number indicates which planet in the system is being referred to, with the highest numbers being furthest from their stars. Omicron Persei 8 is neighbored by the planets Omicron Persei 7 and Omicron Persei 9 as have been referenced by Ndnd. This is a reference and a gag on the common Earth expression, and book by John Gray, Men Are from Mars, Women Are from Venus, the planets that "surround" Earth on either side of its orbit. It is merely meant to hyperbolically portray the large gap in cultural understanding between the sexes.

In "T.: The Terrestrial", it is shown that the planet has hundreds of small moons in its low orbit. Its "third moon" is mentioned by Lrrr in "Spanish Fry". 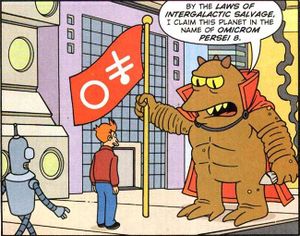