Past-O-Rama is a place made to look like Old New York that's free of charge. The slogan is "it's like stepping back into the year 2000!" It is meant to be an accurate representation of life in the late twentieth century and early twenty-first. Unfortunately, historians of the future are quite incompetent, and the exhibit is full of blatant anachronisms that would be obvious to anyone actually from the time period (except Fry, who probably didn't notice).

Exhibits include cowboys chasing woolly mammoths, an old museum, and a 1992 Latoura. The Panucci's Pizza joint everyone visited in "Jurassic Bark" is possibly located there too. 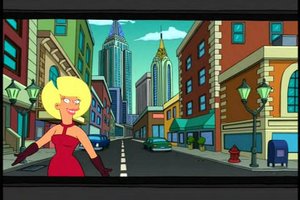