From The Infosphere, the Futurama Wiki
(Redirected from S03E04)
Jump to: navigation, search

"Parasites Lost" is the thirty-fourth episode of Futurama, the second of the third production season and the fourth of the third broadcast season. It aired on 21 January, 2001, on Fox. After obtaining worms from a truck-stop sandwich, Fry finally obtains the affection of Leela, but he is concerned whether she loves him or what the worms have made of him. 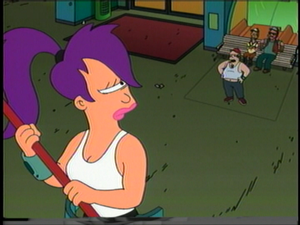 Leela and Sal at the gas station

The Planet Express Ship pulls over for a fuel stop. In the men's room, Fry buys an egg-salad sandwich. Leela warns Fry not to eat a sandwich from a men's room, but Fry eats it anyway. While eating the sandwich, Fry makes several comments about how terrible it tastes, ("It's like a party in my mouth and everyone's throwing up"), but also says that he has had worse. While Fry finishes his sandwich, Leela starts to clean the windshield of the Planet Express Ship, removing, among other things, the Voyager Probe. Several truckers (including Sal and Hoschel) make derogatory, sexist comments toward Leela as she cleans the ship. Fry attempts to defend her, but he unintentionally insults her further.

Back at the Planet Express building Fry despairs over being unable to please Leela. This despair is interrupted when he and Bender go to fix the plasma-fusion boiler, which Scruffy is unable to fix due to a "schedule conflict". However, since they are unqualified to make such repairs, the boiler explodes, lodging a lead pipe in Fry's abdomen. During an examination from Dr. Zoidberg, the pipe is mysteriously cut in half, and the holes in Fry's abdomen seal themselves.

Dr. Zoidberg gives Fry a more thorough examination, which the rest of the crew watches behind a 2-way mirror and on a video screen while eating popcorn. Hermes eats his popcorn using a Jai Alai scoop, because Fry has been eating all the silverware. During Fry's colonoscopy, it is revealed that there is a colony of parasitic worms living in Fry's bowels, within a city made of the silverware Fry ate. The Professor says that the only way to get rid of the parasites is to enter Fry using a microscopic version of the Planet Express Ship.

Act II: "Nobody make a smell!" 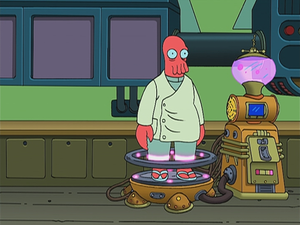 Zoidberg being scanned to create a micro-droid of himself.

The Professor creates micro-droids for each crew member, which, apparently, is cheaper than shrinking them. The micro-droids are controlled via net suits.

The Professor lays out the plan, which involves entering through Fry's ear, and travelling through his systems until they reach the pelvic splanchnic ganglion. Irritation of the ganglion will expel the parasites (among other things) from Fry. The force of the expulsion, according to the Professor, will make Fry lucky to still have his bones afterwards. Fry cannot be warned of the plan, however, as the worms know everything he knows. Leela distracts Fry long enough to launch the miniature Planet Express ship into his ear. In order to keep him distracted, Leela proposes taking a walk.

The Planet Express Crew discovers that the worms are actually giving Fry a mental and physical upgrade making him smarter, stronger, and more coordinated. As they navigate through the nasal passage, Fry sniffs a rose, which he gives to Leela. This bombards the Planet Express Ship with pollen, prompting Zoidberg to suggest they escape through a nasal capillary. The nasal capillary takes the crew into the heart. The crew will be safe as long as nothing causes Fry's heart to beat faster, according to the Professor. Unbeknown to the crew, Fry is stepping into a puddle to help Leela avoid getting her feet wet. Upon taking his hand, his heart starts to beat faster, causing Bender to panic. Professor Farnsworth sets a course for a cholesterol-encrusted valve, in an attempt to avoid certain doom.

After leaving the heart, the ship passes a group of worms jazzercising Fry's muscles, making him as strong and flexible as Gumbercules. Outside of Fry's body, while on their walk, Leela sees Sal, and suggests they cross the street and blend in with a group of pimps. Despite this, Fry confronts Sal, demanding an apology. Leela protests, saying that he is "bulging with what could be muscles." Fry tears off his shirt, revealing his newfound strength, which interests Leela. After a short confrontation, being disarmed and defeated, Sal apologizes to Leela.

The Planet Express Ship sets off a proximity alarm as they neared the stomach, and several worm sentry ships converge and open fire on the Planet Express Ship. Ahead, the entrance to the stomach is starting to close, but they manage make it through, thanks to the help of the worm fighters. They arrive in the bowel and begin an assault on the worm city.

At a coffee-shop across the street from Planet Express, Fry finally shares his feelings with Leela, which he was previously not able to articulate. Leela realizes that the worms may have something to do with the new Fry, and runs off to the Planet Express building without explaining her intentions to Fry. At the Planet Express Building, Leela scans herself to create a micro-droid for herself, and enters Fry by shooting herself into his cup of nocatina. Before the others can stimulate the ganglion, Leela arrives and destroys her micro-droid co-workers with a fire axe. 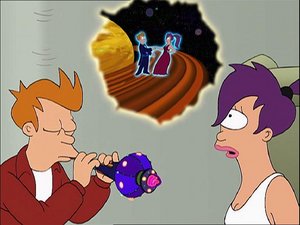 After destroying the microscopic versions of the crew, Leela takes off her net-suit and tells the Professor that Fry might be better off with the worms. Fry enters the room and demands an explanation. After receiving his explanation, Fry says that the worms are the best parasites he's ever had. Later, Leela takes Fry to her apartment, where pulls out a holophonor, one of the most difficult instruments in the universe. Despite this, he plays incredibly well, and the hologram shows Fry and Leela in a variety of forms dancing across the universe. Without saying a word, Leela takes Fry into the bedroom, where says she loves what Fry has become. Fry realizes she may not love him for who he truly is, but instead, for what the worms have made him into. He returns to the Planet Express building and makes a micro-droid of himself, which he drops into the back of his pants.

Inside his own bowel, Fry confronts the Lord Mayor of Cologne. Fry explains his situation and asks the worms to leave, but the Lord Mayor refuses, citing that he came in on the sandwich and raised a cloud of spores in Fry's bowel. Fry and the Lord Mayor engage in a sword fight, which takes them to Fry's brain. Fry threatens to injure himself to evict the worms. They call his bluff, but he cuts several connections within his brain, including the hand-eye coordination lobe. Despite this, The Lord Mayor remains unworried, and explains that he has only damaged his brain to the extent of a week of binge drinking or 5 minutes of cell phone use. He reaches the medulla oblongata, and threatens to kill himself if they do not leave. After a brief standoff, the worms agree to leave, but give him a promise that they will find their way back--"Ever wonder what makes special sauce so special? Yo."

Fry returns to Leela's apartment. He asks to play the holophonor, but Leela protests, saying that she was still seduced from earlier. He insists and starts playing, creating a Frankenstein-like monster. Leela asks what it was supposed to mean, to which Fry responds 'I don't know. I got nervous and started thinking about neck bolts." Leela realizes he's become an idiot again. Fry asks for a chance to prove that it was him, not the worms that made her love him. Fry pulls out a baggie of massage oil and offers to give her the massage he used to give Amy. Leela, covering herself, shoves the holophonor in his face and tells him to leave.

Later that night, Fry begins his first lesson on the holophonor, creating a rudimentary hologram of Leela.

The romance between Fry and Leela is explored in this episode. 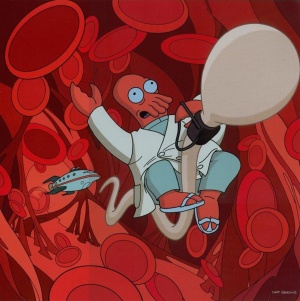 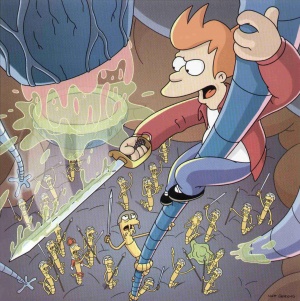 Leela: You're not gonna eat a sandwich from a truck stop men's room are you?
Fry: What's the worst thing that can happen... ewww, it's like a party in my mouth and everyone's throwing up.

Sal: Stands back. I’m gonna puts my moves on her.
[Sal hoots at Leela.]
Fry: That jerk. No one hoots at my captain unless they’re prepared to take it to the next level.
Leela: Fry, please. That’s sweet, but I'd rather not even dignify them with an ass-whupping.
Sal: Yo, sexy mama! Let’s get busy and freaky, in that order.
Fry: Hey, jumbo! How would you like it if Leela said you were sexy and she wanted to make love with you?
Sal: Eh, I’ve gots five minutes. She looks pretty good for a truck-stop chick.
Fry: You take that back! She does not look good for a truck-stop chick.
Sal: Yeah, you’re right. She don’t gots enough meat for a guy like me.
Fry: She does too! She’s loaded with meat! She’s got more meat than a cow!

Zoidberg: Ahh, the hypochondriac's back, so what is it this time?
Fry: Well, my lead pipe hurts a little.
Zoidberg: That's normal, next patient!

Zoidberg: Hmm. We'll need to have a look inside you with this camera. [He holds up an endoscope. Fry opens his mouth.] Guess again.
<poem>Bender: Yo old guy, why do we have to use those tiny micro droids? Can't you just shrink us?
Professor: Oh my no, that would require extremely tiny atoms, have you priced those lately? I'm not made of money! Leave me alone.

Zoidberg: Yippeekayaye! You'll never guess where I've been!
[Zoidberg comes in riding one of Fry's sperm.]

Fry: Apartment 1I. The old me would have made a joke about that!

Fry: Who controls this bowel?
Worm Guard #1: Who wants to know?
[Fry points at a gold statue of himself. Underneath the statue is the inscription "The Known Universe". The statue is in the same pointing pose as Fry is. The worms gasp and bow.]

Lord Mayor of Cologne: You've damaged your brain, Universe, but no more than a week of binge drinking or five minutes on a cell phone. 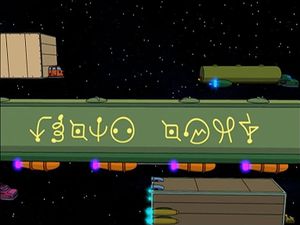