The Spheroids is a species of sphere like shape. Their history and language remain unknown to humans. Despite the fact that their homeworld, Spheron 1, is of no military strategic value, Earth invaded them anyway. The Spheroids are ruled by the Brain Balls, who are the only known members of their species shown with the ability to communicate. As a consequence of the war with Earth, the Spheroids lost their homeworld, and had to move off world to places unknown. A sighting of them in Into the Wild Green Yonder confirms that they are not extinct. One thing that is known about the Spheroids is that they have the power to surpass the escape velocity of Spheron 1 (and assumedly, similar planets) and travel unaided through the vacuum of space. [2ACV17] 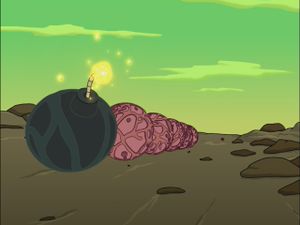