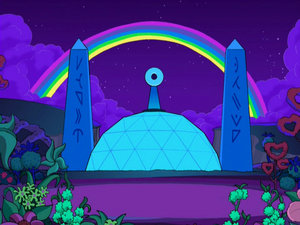 This site lists the sixth and twenty-second symbols. As does this site, leaving only symbol 1 unknown. How canon these are is in doubt, obviously. I haven't done the research myself, so I cannot say where each letter is spotted.
[update]: Actually, in the sreenshot I uploaded of the Hall of Eternity, symbol 22 is on there, so that one at least, is canon. In the original Hall of Eternity shot from The Day the Earth Stood Stupid, it says "Yummy Tummy" (common knowledge), but in this pic, from The Why of Fry, it says "Fuzzy Buzzy".
Also, it means I can't encode "Buddy" in AL2.

]: I heard that in The Why of Fry it says "Fuzzy Wuzzy". Don't call me on this, but I believe they mentioned it on the commentaries on either The Day the Earth Stood Stupid or The Why of Fry.

You're probably right. I used the continue-from-the-last-word method. It probably restarts on the second. 22 would be W in that case.
[update]: Yep, I just checked. If you start over on the first letter, it's fuzzy wuzzy.

[Whaler on the Moon] The second Alien Alphabet may be known by the name "Betacrypt 3", Farnsworth uses this designation in Leela's Homeworld, although it is not sure if he really meant that. But as it is the only other alien alphabet except alienese, it might be this one.

People keep saying that, but I doubt it. And there are other languages, just look at the pillars in "My Three Suns" - not that they mean anything, but it proves that there aren't just two languages. And unless the printout was in AL2, there's no reason to believe the two are related. And in the commentaries, they always say "Alien Language Two" - not once do they say "Betacrypt three".

I'm officially recommending a new "Appearances" method. I've used it experimentally on The Cyber House Rules. I think this page should be about the Alien Languages, and the actual sightings should be listed with the episodes they appear in (other than the opening credits, which could be listed here). That will keep this page from getting too cluttered. If someone wants to know what episodes have alien languages in them, they can just search for "AL1" or AL2", which should contain the articles that mention them... Buddy13

Nobody argued, and I think it really does clutter up this page to have all the listings on here. So I'm removing the listings here (in comment form, edit to view), so they aren't deleted. Copy them to the appropriate episode pages, and then remove the list from here. If you wanna. Buddy13

It is likely that the AL3 language might have been some other writing system, or something purely made up. In My Three Suns a lot of various languages appear on the pillars, apparently saying "Please don't drink emperor". In fact, it surprises me Quenya or at least Klingon (with the obvious large Star Trek references) made an appearance in the show. --Svip 12:13, 9 March 2007 (PST)

You'd think Tolkien's works may made an appearance (though the inside of the Near Death Star is an obvious reference to Moria). Also, you call them "languages", but in fact it is just a replacement for Latin for writing English. Nah, it would actually be a language if it was an actual language. --Svip 12:56, 9 March 2007 (PST)

I think I found it. AL3 amounts to a goof on the part of the comic writers. This is not written in perfect AL2, instead it is encoded using the methods of AL1 but characters of AL2. Which is why I though the AL2 was gibberish, it's actually AL3. - Quolnok 14:27, 9 March 2007 (PST)

Given how the drawers of the comics were not the same as those who drew the animated shows (well, that is what I assume), I would simply dismiss this as a screw up on the comic's side. Best options to find AL3 would be the thing around Leela's arm (revealed in Leela's Homeworld) ([1]) or all the panels around the emperor's seat in My Three Suns. --Svip 15:22, 9 March 2007 (PST)